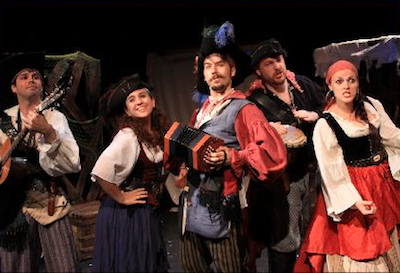 The cast of THE GREATEST PIRATE STORY NEVER TOLD. Photo by Lars Lunde.

What do you get when you combine musical comedy, improvisation games... and pirates? The answer — The Greatest Pirate Story Never Told — can be seen every Thursday and Saturday at the Snapple Theater Center just off Broadway. This highly enthusiastic and kid-friendly musical features a cast of five quick-thinking improvisors who use audience suggestions to fuel their wacky adventure on the high seas.

The play’s lengthy setup tosses out every pirate cliché in existence, including a shipwreck, a buried treasure, and a curse from an eccentric sea witch (sadly, no parrots!). This misfit crew, it transpires, must perform the greatest pirate epic ever told or risk entrapment in modern-day New York City. When their script is partially destroyed, the pirates-turned-actors are forced to make up large portions of it. Details about these characters’ time-traveling predicament seem inexplicably convoluted, but in the end such thin plot points hardly matter. They are solely a means to frame the audience participation at the heart of the show’s premise.

When suggestions from the crowd are inserted, Mad Libs-style, into the story’s prologue, the cast launches into some unexpectedly witty improvisation. As is the case with ad libs, the most ridiculous audience ideas provide the best humor. That most of the cast accompanies these live musical numbers while providing off-the-cuff rhyming lyrics makes it all the more impressive. In addition to these impromptu songs, there are a variety of audience-dependent games. If you’ve ever seen an episode of Whose Line Is It Anyway, it’s fun to recognize the kind of humor utilized here. (An alternative title to this show could be “Whose Eyepatch Is It Anyway.”)

Between these organic moments, however, The Greatest Pirate Story Never Told relies heavily on cheesy, overly-earnest humor. Christopher Leidenfrost’s punchlines can often be seen coming from many nautical miles away. (“We’ll be marooned!” “Nooo! I hate that color!”) Similarly silly pratfalls and fight choreography throw clever, unscripted moments into sharper relief; the cast tries their darnedest to make G-rated jokes sound as fresh as their improvised ones. Young kids might get a kick out of such comedy, but some murky, meta-theatrical exposition backfires due to the off-kilter and inconsistent nature of audience participation. Nods to New York acting careers and the “Square of Time” just outside the theater give the production a welcome degree of specificity.

The cast of five, which includes writer-director Leidenfrost, uses their unique theatrical strengths cohesively to sell over-the-top goofiness. Rebeca Diaz makes a winningly manic sea witch, and there’s a twinkle in Daniel Pivovar’s eye that hints at genuine comedic chops under less family-friendly circumstances. The eponymous closing number is a delightful mash-up of pirate-ified Broadway musicals. Featuring a phantom of the opera wearing a white eyepatch and a skull-and-crossbones flag waved à la Les Misérables, the tune delightfully parodies many of the big-budget shows playing just down the street. Families and children who prefer off Broadway endeavors and enjoy the Pirates of the Caribbean movies can certainly get on board with such spirited silliness.

(The Greatest Pirate Story Never Told plays at the Snapple Center at 1627 Broadway / 210 W. 50th Street, through December 30, 2013. Performances are held Thursdays at 8 PM (teen/adult version) and Saturdays at 11 AM (kids version). Tickets are $39 to $99 and are available at ticketmaster.com by calling the box office at 212.921.7862. For more show info visit http://www.greatestpiratestory.com.)