The Fig Leaves are Falling 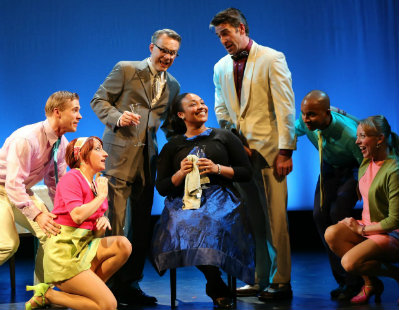 The cast of THE FIG LEAVES ARE FALLING.

BOTTOM LINE: A quaint period piece that focuses on four adults as they attempt to navigate the tumult of 1960s-era social change.

When The New York Times’s theater critic, Clive Barnes, reviewed The Fig Leaves are Falling in January 1969 he didn’t mince words: “There is nothing wrong with the show,” he wrote, “that a new book, new music, new lyrics, new settings, new direction, new choreography, and a partially new cast would not possibly put right.” Four performances later the show closed its doors making it a legendary Broadway failure.

Apparently, 44 years later, director Ben West of UnsungMusicalsCo. Inc. decided to take Barnes’s words to heart, deleting several scenes from the original production, rewriting others, and introducing three never-before-heard musical numbers. The result is uneven. While the ensemble is undeniably talented and the music engaging, the characters rarely move past caricature. What’s more, the story seems cast in amber with little to no appreciation for the political and social change that upended pre-1960s propriety.

Indeed, politics are wholly missing from Fig Leaves; there is no mention of the Vietnam War, the struggle to win civil rights for people of color, or feminism. Instead, the story focuses on one couple, Harry (Jonathan Rayson) and Lillian Stone (Natalie Venetia Belcon), whose 20-year marriage begins to unravel after Harry catches the eye of young, effervescent Jenny Chapman (Morgan Weed), his sexually-liberated new secretary.

That the story is preposterous goes without saying. Indeed, it feels more like a male I-can-do-whatever-I-want-and-still-have-an-adoring-wife who-will-cook-clean-and-care-for-me fantasy than something that might actually transpire. Despite this, Rayson’s Harry Stone is compelling and often poignant. Likewise, Morgan Weed. Sassy and proudly sexual, she struts her stuff with poise and verve and her vocal numbers are powerfully delivered.

Ben West, in a Director’s Note, writes that the revised play is “quite different from what originally opened on Broadway in January 1969.” I will have to take his word for it. In its current incarnation, The Fig Leaves are Falling is less about falling taboos — the sexual revolution, if you will — than it is a conventional story about making mistakes, adapting to change, and choosing which opportunities to ignore and which to accept.

Allan Sherman [1924-1973] is said to have written the book and lyrics after the dissolution of his own 21-year marriage. Perhaps it was a cathartic exercise for him. One can only hope.  Still, when all is said and done, Fig Leaves is a somewhat entertaining period piece, a locked-in-time look at the upper middle class suburbanites that Betty Friedan railed against in her 1963 classic, The Feminine Mystique.