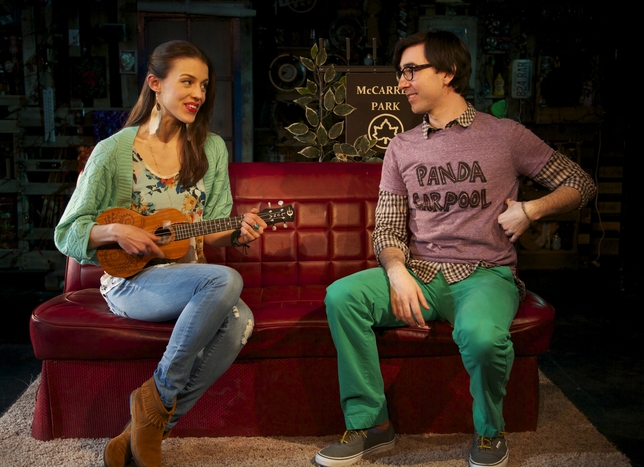 Katherine Cozumel and Max Crumm in F#%KING UP EVERYTHING.

BOTTOM LINE: Despite the energy of the cast, F#%king Up Everything can’t overcome an inane, overstated book.

For a musical about 20-something Brooklynites to work, we’ve got to be able to root for the characters. To be able to root for the characters, they should be somewhat relatable. For the characters to be somewhat relatable, David Eric Davis and Sam Forman are going to have to make a few adjustments to their current creation. They don’t seem to trust their audience to make its own observations and form its own opinions so they unfortunately (at least for the intelligent theatergoer) do all the work for us. Which means instead of a character simply doing something nice for his bestie, we get dialogue like, “that’s just the type of shit you do for your bestie.”  In other words, everyone constantly comments on his or her actions. Like a predictable rom-com, F#%king Up Everything hits you over the head, telling you what you’re supposed to think and feel at all times.

The story follows a nebbish puppeteer named Christian (Max Crumm, of Broadway’s Grease) who meets and falls for new-girl-in-town Juliana (Katherine Cozumel, in her NYC debut). But Christian’s best friend Jake (Jason Gotay) is much cooler (a womanizer, but cooler!) so he may screw things up before Christian and Juliana inevitably end up together. An underdeveloped character named Ivy (Dawn Cantwell) digs Jake and a stoner named Tony (Douglas Widick, a very funny actor rising above the material) gets high a lot.

Crumm has a standout comedic bit during the early number “Juliana." As he stops the song because he thinks he’s going to be sick, it’s a glimpse of whacky hilarity that’s truly the only laugh-out-loud moment of the evening. Gotay brings Jake to life with a slimy yet slick charisma, while Lisa Birnbaum’s killer pipes make Arielle (a sexy music act booker) a welcome addition an hour into the show. Deb O’s set is also phenomenal; it effortlessly transitions from dive bar to living room and back again.

But these actors are let down by corny jokes that don’t land (G-train and Bushwick mentions are particulary tired) and lame lyrics you wish were more telling (Jake and Juliana’s duet is called “Hot,” because they find each other attractive). It’s as if a 50-year old wrote the book and lyrics, overwhelmingly miscalculating how 20-somethings behave. Davis and Forman, on numerous occasions, throw the characters’ motivations out the window to get a cheap laugh. Take, for example, the moment Christian enters a bar with one goal: to meet and impress a woman. Seconds later, he begins embarrassingly singing “Under the Sea” from The Little Mermaid. Because...he’s nerdy? So he needs to put on display that he’s nerdy? So we remember he's a big giant nerd? How much more endearing the moment could have been had Crumm not been forced to try and make the audience laugh.

Unfortunately the proceedings conclude in a condescending manner with everyone singing about being yourself. “Stick to who you are like crazy glue,” they say. But...these broad caricatures rarely did that, so why should we?