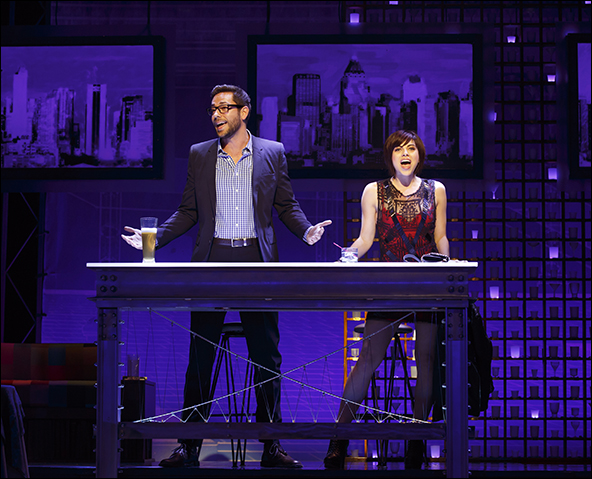 BOTTOM LINE: Up close and personal observation of a bumpy first date. It lacks depth, but it’s easy-breezy end-of-summer fun.

They’re about to meet each other in Broadway’s shallow but winning rom-com First Date. Their experience plays in real time over a brisk 90-minute intermission-less evening. Aaron and Casey have walls, barriers and doubts galore: this is his first blind date so he’s bound to say the wrong thing(s) while she usually goes for bad boys as opposed to a guy like the adorkable Aaron. The song “First Impressions” hilariously and intelligently highlights what we would never say out loud on a date. After some rocky moments (at one point Aaron calls Casey a ‘Blind Date Slut’) the two ease into one another and open up. Aaron still has feelings for his ex, Allison (Kate Loprest), who no doubt has a few songs of her own. Rodriguez’s Casey delivers a heartfelt ballad detailing how it’s “Safer” to shut out Mr. Right. Through all the ups and downs, anyone who has seen anything can guess how this all ends.

Levi and Rodriguez keep things afloat with appealing chemistry and spot-on timing, although it’s Rodriguez who’s the true stand-out. As Austin Winsberg’s book is filled with one-liners over genuine character-building, it’s remarkable how much Rodriguez is able to pull out and bring to the surface. Her Casey is feisty; she’s scared, she’s audacious...she’s relatable through and through.

Although his character is presented as one of the biggest caricatures of a gay man in recent memory, Kristoffer Cusick nearly steals the show as Casey’s BFF Reggie. His three “Bailout Songs” are continuously entertaining and uproarious; they’re also the wittiest and most crowd-pleasing numbers of the night. In fact the entire ensemble, via Bill Berry’s effortless direction, add ample energy as restaurant patrons or friends/family creeping around Casey and Aaron’s minds.

While I do wish there were more moments of genuine sincerity (too often the characters are ready to go with quips only those in a play would say), First Date makes for a great date night and will surely please its target Broadway audience.