By Lucile Lichtblau; Directed by Carl Wallnau
Produced by The Centenary Stage Company 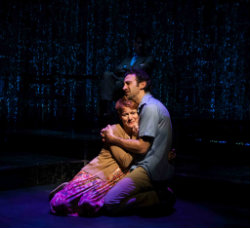 BOTTOM LINE: Framed by a failed terrorist attack, this play is a lovely and complex character study from script to execution.

We live in a frightening time of terrorists and unknown threats. But is anything more terrifying than opening your heart to someone?

As The English Bride opens, an airport announcement gives away the ending -- a flight to Dusseldorf and Tel Aviv has been cancelled. It is 1986, and an attempted plane bombing has been thwarted. We know what happened, but the events -- the human events -- leading to this near-tragedy become the real mystery. An English woman in her 40’s is taken in along with her younger, Arab lover. Now it’s up to a Mossad agent to find some hints of truth from two people whose lives and relationship with each other are flooded with truths distorted.

Ezra Barnes portrays Dov, the agent whose line of questioning frames the play. The action wanders between his questioning of the English woman, Eileen (Amy Griffin), and the terrorist, Ali (Michael Gabriel Goodfriend), mixed in with flashbacks between the two. While Dov’s interrogation reveals lies on both parts, the flashbacks also bend the truth, leaving the audience to their own investigation into the relationship. As we watch the two in the various phases or their romance, we begin to learn that the only truth we can cling too is the damaging power of insecurity and secrets.

The Centenary Stage Company’s The English Bride is a deceptively simple piece. Playwright Lucile Lichtblau has cleverly crafted a play about people, not an event. In the brief 90 minutes, Lichtblau doesn’t rest, developing flawed, complicated characters that have the ability to fool each other, themselves, and even us. Carl Wallnau’s direction keeps the pace of the script and seamlessly weaves his actors in and out of past and present, truth and uncertainty. This lovely marriage of playwright and director produces an actor’s dream playground.

And taking advantage of the wealth she’s been given, Griffin’s standout performance as Emily is an experiment in complexity and contradiction. She possesses a spastic charm, shrill and relentless with her speaking cadence, she is appropriately exhausting to watch. She never seems to stop speaking, as if she’s outrunning her own mistakes and insecurities, frightened to pause for even with such vicious predators at her heels.

Goodfriend provides a lovely balance to Emily through is thoughtful portrayal of Ali. At one moment a romantic victim and the next a calculating manipulator, Goodfriend’s character can not be nailed down. In flashbacks, we all fall for his promises of love and ever afters, but as the play progresses, we’re unsure if this is a man misunderstood or a monster. Again, the facts of the case are true - he did attempt to bomb that plane. But his humanity is questioned on every level, and Goodfriend has worked to ensure that Ali can no be nailed down - by Dov, by Emily, or by us.

As Dov, Barnes is a nice grounding element for the production. Perhaps a bit stiff at first, Barnes shines when he’s given the opportunity to play an active role in the plot and not just serve expositional requirements. His relationship with truth, as both a principal and a weapon, is a fascinating balance between personal integrity and the greater good.

Bob Philips’ sparse scene design is appropriate, and his use of a camouflage curtain background is a lovely thematic connection, reflecting desires to either hide or avoid being invisible. This pairs well with a versatile and subtle lighting design by Joyce Liao.

You never quite know who to believe in The English Bride, so prepare for some post-performance conversations. As this production proves, when it comes to love, there are always elements of ambiguity that have the potential to explode at any moment.