Tickets can be purchased by visiting ovationtix.com or by calling 866.811.4111

Written and Directed by Avner Eisenberg 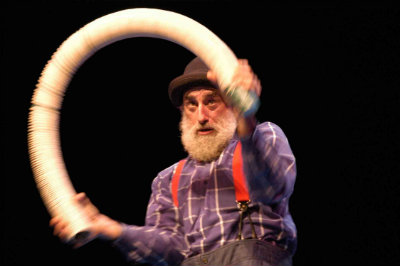 Avner Eisenberg in EXCEPTIONS TO GRAVITY. Photo by Marie Clauzade.

BOTTOM LINE: A kid-friendly one man show that is a vaudevillian throwback.

Avner the Eccentric (Avner Eisenberg), the man behind the quirky kid-friendly show Exceptions to Gravity, is straight out of the turn of the century — and I don’t mean the current century. Avner’s sleight-of-hand tricks and lo-fi (or, more accurately, no-fi) effects seem like the kind of thing that my parents’ parents (or even, bear with me, my parents’ parents’ parents) might have seen in the park, or on the boardwalk, way back when.

The title, Exceptions to Gravity, is partially accurate. Many of the tricks Avner has up his sleeve, such as balancing a full-sized metal ladder on his chin, do entail an awesome defiance of earth’s most insistent physical law, all the more confounding for the fact that Avner is by no means a young man — my bones ache just thinking about some of the things he puts his body through during the show. There are plenty of moments, though, when gravity is making no exceptions, like in the opening sequence when Avner is comically dropping one thing after another with a maddening rhythm. The common denominator is that both are funny and a little awe-striking. The man has a certain finesse about him.

Avner is a bearded, old-timey performer whose tricks oscillate between magic, miming, and slapstick humor. He wears a bowler hat and suspendered, oversized pants, both of which come into play in many of his gags. He uses old timey-props, too, such as popcorn, paper cups, roses, and good old reliable water, repeatedly bending our undertstanding of how these things can be manipulated; there were many moments when the audience was literally “oooing” and “aahing.”

What I appreciated most about the show, however, may be the same thing that leaves some audience members feeling a bit strange. In some ways, Avner has a perverted edge to him. It’s perfectly innocent, but it’s there. There are many moments when he sticks his hands down the front of his pants, or something falls into his pants, creating a large bulge in his crotch, to which he reacts with a bashful, tonguey smile. At other times, his suspenders fall off his shoulders and his pants drop, revealing his boxer shorts. This is all in the name of comedy, but it brought about a palpable discomfort in the room.

These days, parenting culture seems to have a strong emphasis on protecting children from all the physical and psychological hazards out there in the real world. While this makes perfect sense, it also has a tendency to go a bit too far and parents shelter their kids from things that are actually completely harmless — like Avner. I think it is important to note that, while many of the parents seemed disarmed when he pointed his bulging crotch at a room full of children, the children laughed just the same. It’s safe to say that there was no harm done.

Exceptions to Gravity is a great show for kids of all ages. If you have kids, I would suggest preparing yourself ahead of the time to go with the flow and not get nervous about Avner's crotchy jokes. Although Avner may push a few limits, he never goes to far. He’s primarily a blast from the past and I have a feeling that my parents’ parents’ parents’ parents wouldn’t have batted an eye at his antics.

(Exceptions to Gravity plays at the Canal Park Playhouse, 508 Canal Street, through March 24, 2013. Performances are Fridays at 7PM, Saturdays at 1PM and 7PM, and Sundays at 1PM and 4PM. Tickets are $20 and can be purchased by visiting ovationtix.com or by calling 866.811.4111. For more show information visit canalparkplayhouse.com.)