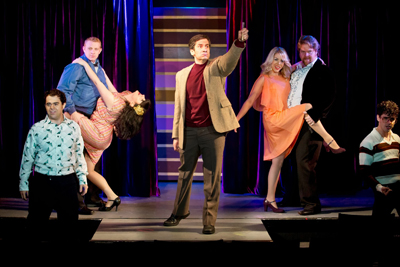 BOTTOM LINE: Seth Rudetsky’s campy and irreverent musical has a magnificent cast that hits all the right notes to deliver a delightful new comedy.

Seth Rudetsky is known to have a firm grasp on anything and everything within the world of musical theatre. Between his regular afternoon hosting gig on Sirius XM’s Broadway channel and his comical and spot-on deconstructions of Broadway singers’ vocal technique on YouTube, it wasn’t a big surprise to hear that he’d be channeling his knowledge and talent into a musical of his own. That musical is Disaster! A 70s Disaster Movie Musical now playing at St. Luke’s Theater off Broadway, and despite the implication of its title, it’s a pretty big success.

Playing off the popular (and often unintentionally ridiculous) disaster movie genre in the 1970s — like Earthquake, The Poseidon Adventure, The Towering Inferno, and The Swarm — Disaster! is a campy new musical about an ill-fated casino built to float alongside a Manhattan pier, bypassing the state’s gambling laws and plenty of other health and safety codes. When corrupt and money-hungry owner Tony (John Treacy Eagan) is approached by renowned “disaster expert” Ted (Rudetsky) about the dangers facing the casino and its guests, Ted’s warnings go ignored and by the end of Act 1, all hell has broken loose for everyone on board.

Hilariously woven into the plot are dozens of '70s hit songs, including “Hot Stuff,” “I Am Woman,” “and “Saturday Night.” Writers Rudetsky and Jack Plotnick mock the jukebox musical tendency to shamelessly incorporate popular songs into the book with smartly literal and extremely campy interpretations (such as “Three Times a Lady” being sung as a dead woman’s three disjointed limbs are tossed to sea). Not only are the songs perfectly placed for comic effect, they’re also sung and performed by cast members who have mastered both spot-on comedic timing and insane vocal ability (one would expect no less from a show created by a man with a fetish for fierce belting).

While the immense talent of the entire ensemble makes it difficult to highlight individuals, Jennifer Simard as Sister is a comic genius with an incredible vocal range, and Mary Testa, the queen of Broadway character actresses, is a scene stealer whenever she steps on stage. There is no weak link in the all-star cast of Broadway favorites and up-and-coming talent, and their committed performances turn a light and campy musical into a comedic masterpiece. Jack Plotnick’s direction and Denis Jones’s choreography also deserve credit for maintaining just the right balance of smart satire, fluffy comedy, and sweet sincerity, and the show is kept at a delightfully fast pace which only serves to strengthen the hilarity of the never-ending disasters which include an earthquake, tidal wave, fiery explosion, and attacks by sharks, piranhas, killer bees and manic rats.

Disaster! is campy and irreverent entertainment at its finest, never taking itself too seriously. Sure, it could perhaps benefit from shaving about ten minutes off the two-hour running time — by the time the rats attack we’re ready for the disasters to end — but the show never falls short in providing belly laughs and delightful vocal performances from start to finish. For those who love a good campy musical, Disaster! A 70s Disaster Movie Musical is a must-see.