Tickets are $18 at door, and $15 in advance with discount code: Chess 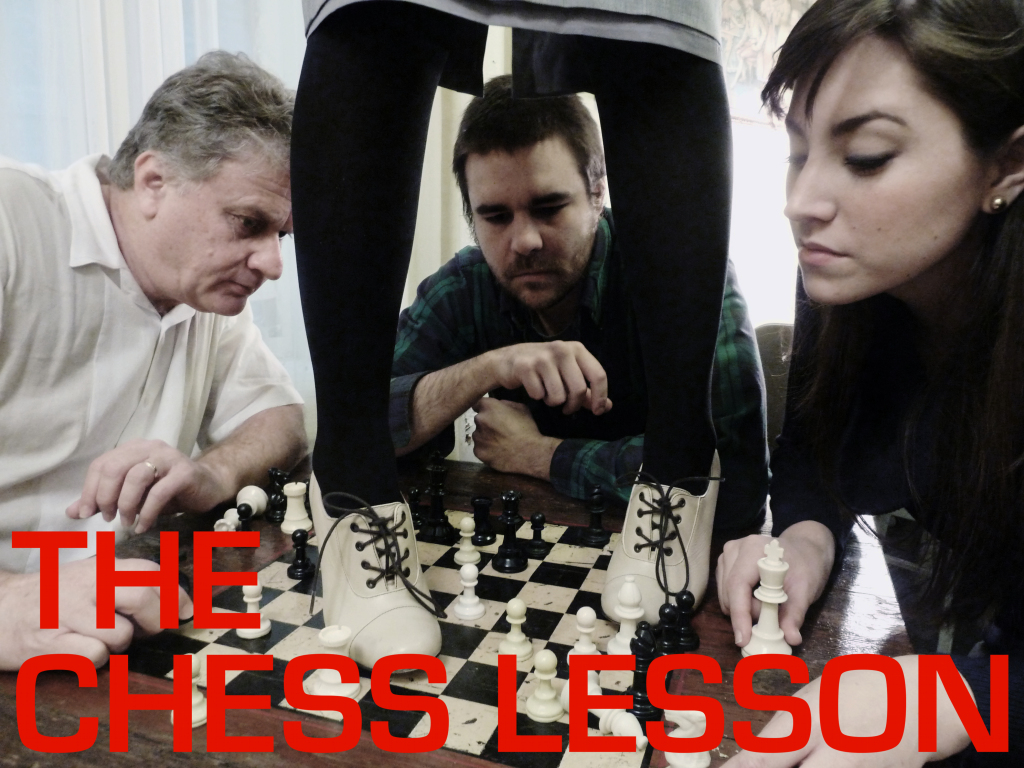 BOTTOM LINE: The Chess Lesson boasts an interesting premise, buts its tone, structure, performances and directing are all over the place.

Playwright Sari Caine is a real-life chess instructor who has devised a new play, apparently based on some of her experiences. It’s a valid, worthwhile endeavor. Some of the best plays I’ve seen in New York are autobiographical or semi-autobiographical; and who better than Caine to write a play called The Chess Lesson?

Caine plays Teacher; her students are Mateo (the grandfather of one of her students, played by David Crommett) and married couple Isabella (Meg Fee, wound-up) and Paul (David Rigo, easygoing). For ninety minutes (no intermission), Teacher details the rules of chess while other arbitrary information comes and goes -- info that never really leads anywhere (i.e. Teacher finds Paul attractive, Paul and Matteo both like her chair). These specifics could have been used to the play’s advantage. If we were watching four adults attempt to behave like adults but who happen to come across like children, a la God of Carnage, some of this material could thrive. If Teacher subtly looks Paul up and down, if Matteo casually tries to get Paul out of the chair...then we’re onto something. What we get instead, for example, is a moment where Crommet’s Mateo cries hysterically about an adult who used to cut his sandwiches. Or Caine’s Teacher saying “Take me Paul!” while stripping to her bra. As it stands, the actions of these Adults-Who-Act-Like-Children are more awkward, embarrassing or extraneous than they are funny. It's less God of Carnage and, unfortunately, more Step Brothers.

The rare moments the characters behave like adults are gold. They are simple, real-life, human moments that taught me more about who these people are than any of their screwball antics. Isabella: “You swept me off my feet.” // Paul: “I was drunk.” Love it.

The problem is not the story of a chess instructor and her students, which is inherently unique and entertaining. The problem is the genre. This material does not work as an absurdist comedy, at least not in its current state. Because every single character is presented as a caricature, not once did I care about what would happen to any of them. Instead of an insightful dark comedy about a quirky chess teacher and her “students” (overworked suburban parents), The Chess Lesson is overdone and unrelatable at nearly every turn.

As the events progressed, I kept wondering why nobody simply leaves the room. What’s making them stay? And as the situations grow more absurd, their motivations grow more unclear. So once Paul takes off some of his clothes (!!), instead of laughing you’re saying to yourself “Well.. why? Why would/should/does/did he do that?” A similar issue is that the characters don’t have distinct enough personalities. So when two of them share a dance at the end of the play, it could have been any combination of the two and it would have packed the same exact punch.

Director Elizabeth Miller provides too much too soon in terms of the zaniness of this world. She also, on more than one occasion, has the men delivering dialogue upstage while the women do random stage business at the forefront.

On the plus side, Miller and Daryl Embry’s set design is innovative and adorable: the perfect elementary classroom complete with chalkboards, blocks and chairs I didn’t even know came that small.

But despite the stellar set, and some pointed work from Meg Fee as a tense mother, this Lesson was a missed opportunity to develop Caine’s great concept in a more honest fashion.

(The Chess Lesson plays at IRT Theatre, 154 Christopher Street, 3rd floor, through January 27, 2013. Performances are Thursdays through Saturdays 8PM and Sundays at 7PM. Tickets are $18 at door, and $15 in advance with discount code: Chess.)