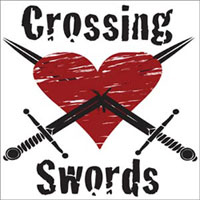 Jeremy (Lyle Colby Mackston) and David (Marrick Smith) are best friends at St. Mark’s school for boys. When it is announced that the school play will be Cyrano de Bergerac and performed with the girls at St. Anne’s, Jeremy convinces rugby player David to audition with him as a way to meet girls. Jeremy is cast as Cyrano, David is cast as Christian, and Nicky (Ali Gordon) from St. Anne’s is cast as Roxanne. Inevitably, David falls for Nicky -- who instead has her eyes set on Jeremy -- and Jeremy realizes that he has feelings for David. Meanwhile, the teachers chaperoning the production are conflicted over how to best help the children prepare for their futures, all the while facing their own failures along the way.

It may seem like there is quite a lot going on in exposition, and there is. Luckily, in the second act almost everything comes together and pays off in the end. The audience applauded, cheered, gasped and snickered -- sometimes at the same reveals and plot points with opposite reaction -- which to me is usually a sign of success. Of course, the show needs work in regards to pacing, and some moments were a bit overwrought in my point of view, but for a festival devoted to developing new artists Crossing Swords is a fine addition. It’s a bit difficult to go into detail without revealing any spoilers, but suffice to say I found myself choking back tears by the end despite feeling disconnected at the act break.

Composer/Lyricist/Bookwriter Joe Slabe manages to nearly duplicate the mix of comedy and tragedy that Cyrano de Bergerac carries with his approach. As a composer, he delivers a few melodies that stick, including “The Three of Us” and “Heart on My Sleeve.” The lyrics have some very clever internal rhymes (that may actually be beyond the maturity levels of the characters). Finally, the book is functional if a bit overwritten, and there’s continual reference to what happened to a boy named Hopkins that is never actually revealed -- which I found frustrating.

More important than the piece itself are some of the performances in this production. Smith as the ‘dumb’-ish jock David gives an incredibly grounded performance and is definitely a name to watch in New York theater. Gordon, as Nicky, is equally mature and hesitant in her portrayal of Roxanne as well as her own first encounters with the opposite sex. Linda Balgord (who, in my opinion, was the one saving grace of the short-lived 2007 Broadway musical The Pirate Queen) is both feisty and lovely as Miss Daignault. Steven Hauck's shockingly flawed attempt at helping Jeremy is all the more effective after his even-keeled performance until that particular scene.

I look forward to seeing future work from Slabe. I'm not sure if Crossing Swords will have of a life after NYMF, but for the time being it is a solid entry in the festival. Perhaps it could be even better with a bit more focus on the three students and less on the teachers -- although that could perhaps shift the show into being mediocre but marketable (hey, it worked for Spider-Man).