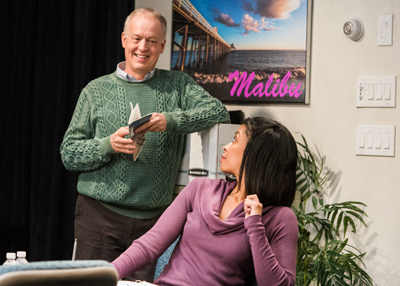 BOTTOM LINE: A poignant glimpse into an archetypal office and the folks who inhabit its cubicles.

For anyone who has worked in an office -- particularly an office in New York City in which turnover is high and morale is often low -- Core Values will undoubtedly seem familiar. When I saw the production, the two women next to me were confused and bored, but as they looked more like matinee ladies than indie theatre consumers (60+, fur-clad, mid-show napping), I attributed this to the play's authenticity which those unfamiliar with the work world or too far removed from it today might not understand. Core Values also delves into some broader thoughts about business and economics (the play is about a travel agency, an industry the internet has uprooted), though the play's resonance is in its characters and their relationships with each other. Those who have a personal attachment to this type of work environment are likely to find it all highly relatable.

Richard (Reed Birney) is the well-meaning boss of a small travel agency in Manhattan who isn't yet ready to throw in the towel despite a waning industry and an unenthusiastic staff. The play takes place at the company's annual retreat, which is in reality just a weekend spent in the conference room playing trust games and setting goals because the budget doesn't allow for anything fancier. Attending the retreat are Richard's employees Nancy (Susan Kelechi Watson), Todd (Paul Thureen), and his newest hire Eliot (Erin Wilhelmi), who is young and eager and wants desperately to please. The company's fourth employee, Lucas, is conveniently away on a family vacation.

The always delightful Birney perfectly encapsulates the suppressed agony of a middle-aged man in a middle-management position trying desperately to cling to the life he once had. Newly divorced, he seeks the friendship of his employees, though it's clear he has always been a caring boss with whom the staff has a great rapport. This makes it even more uncomfortable that both Nancy and Todd are planning to leave the company. Birney plays Richard's duality with acute attention -- the optimistic leader has a transparent cover that gives way to a sad soul who quickly earns our sympathy. Core Values shows us that things change despite our best intentions to control our own destiny.

Steven Levenson's script mines the awkward relationships inherent in a work environment, where people who would otherwise not be friends must spend the better part of the day together and end up forming a bond regardless. Director Carolyn Cantor plays up the humor that stems from these often uncomfortable encounters, taking advantage of the physicality within these situations. And with the audience on two sides of the space with the raised stage in the middle, Cantor gets to indulge in 360 degrees of physicality. The opening bit has Eliot diligently setting up bottled water on the conference table, taking great care to not mess up the task. Wilhelmi, as the mousey new hire, creates a palpable wound-up energy that perfectly exudes the discomfort of a young person's first day at a new job and the utter lack of grace that comes from such an event. The cast does an excellent job with the humor and the play's nuanced comedic take.

Core Values gives the audience a voyeuristic view on a relatable scenario, and you watch the piece from that vantage point. The characters themselves aren't given much depth as their personal circumstances are only necessary in the sense that those factors play a part in these work relationships. As a result you aren't necessarily invested in anyone's personal struggle, except maybe Richard's, as he's at the eye of the collective storm. Rather, Core Values lets you in on a very human experience, and you can impose your own experiences accordingly. It seems like this play would resonate differently for those who have personal experience with the situations it details (like an extra thoughtful episode of "The Office"). Surely this environment is often seen in the land of day jobs, and I have to imagine that many audience members will be acutely familiar with its inner workings.

(Core Values plays at Ars Nova, 511 West 54th Street, through May 18, 2013. Performances are Tuesdays through Saturdays at 8PM. Tickets are $30. To purchase tickets and for more info visit arsnova.com.)