By Lyle Kessler; Directed by David Fofi
Produced by The Amoralists 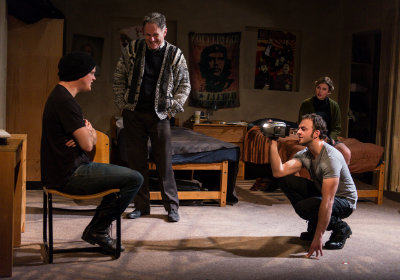 For the next four weeks at Rattlestick Playwrights Theatre, The Amoralists Theatre Company presents the world premier of Collision, a dark drama that asks, “What happens when all the wrong people meet at exactly the right time?” Directed by David Fofi (Elephant Theatre Company Artistic Director), Collision marks the latest play by Lyle Kessler, writer of Orphans, which will make it Broadway debut this spring.

In a college dorm room, two random roommates make an unlikely and deep bond. The charismatic and manipulative Grange (Kautz) takes brawny but uncertain Bromley (Lawson) under his wing. Grange brings the sweet but damaged Doe (Stromberg) and their burned-out teacher Professor Denton (Cullen) into their partnership. Through a series of hazing acts, Grange orchestrates the development of an unnatural bond between the four outsiders, and like an exponential version of Heavenly Creatures, the quartet creates an insular world view that spirals further and further from rationality. By the time criminal dealer Renel (Grant) becomes ensnared, the foursome have taken a dangerous turn, and their fixed course threatens violence.

Kessler’s disturbing play delves into dark and disconcerting places, but the danger and discomfort for the audience is tapered by a peppering of stunning language, vibrant speeches, and genuine emotion between the characters. Kessler brilliantly creates the gradual devolution of a typical scenario from an alpha/beta relationship to a cultish clan. It is frequently uncomfortable to watch this play; the narrative is replete with bullying, sexism, and manipulation, but the complex work is seamlessly staged and expertly executed by Fofi. The tight ensemble performs masterfully, balancing their portrayals and giving honesty to extreme situations. As the malevolent ringleader, skillful Kautz continually exudes magnetism and sex appeal while his character’s actions become increasingly repellant. The intricate and ominous lighting, emotive sound design and drearily evocative set seal the environment.

Collision is a smart, troubling, and timely play, masterfully brought to life by one of New York’s most respected downtown theatre companies. Not for all audiences, this play isn’t a night on the town or a family-friendly romp. It is an intense, intelligent, and complicated piece for audiences ready to be challenged and intrigued.

(Collision plays at Rattlestick Playwrights Theatre, 224 Waverly Place between Perry and West 11th Street, through February 17, 2013. Performances are Mondays, Tuesdays, Thursdays, Fridays, and Saturdays at 7PM, and Sundays at 5PM with no performance on February 3rd. Tickets are $55 and are available at www.collisiontheplay.com or by calling 866.811.4111. A limited number of $20 student tickets will be available online. For more information visit www.CollisionThePlay.com.)