Off Off Broadway, New Play
Extended through 4.12.13
The Parkside Lounge, 317 East Houston Street 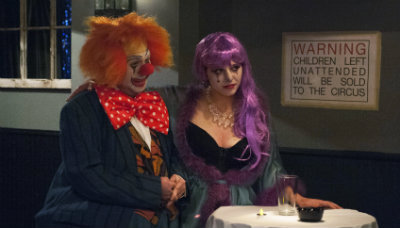 BOTTOM LINE: Both clown lovers and clown skeptics will find themselves giggling at this comedy, set in an underworld populated by clown gangsters, junkies, and floozies...and where audience drinking is encouraged.

No, not clown car…Clown Bar. One letter makes a pretty crucial difference. When you walk into the back room of the hipster dive Parkside Lounge, you are handed your very own round red nose. You can order specialty clown-themed cocktails as a pianist, dressed as a mime, tickles the ivories. But there’s more in store than just booze and funny shoes. The play proper, which concerns a clown-turned-cop determined to avenge his clown brother’s murder, can be described as the illegitimate child of film noir and the circus, as breast-fed by Bukowski and brought up by Cabaret’s Master of Ceremonies.

Clown Bar does detective story spoofs one better by employing every single familiar crime-movie trope — brooding hero, crazy crime boss, conflicted gun moll, hooker with a heart of gold — and making them all...well, clowns. It’s weird how well this works: playwright Adam Szymkowicz (Hearts Like Fists, Deflowering Waldo) has combined two inherently ridiculous forms of entertainment and created a perfect storm of ridiculousness. The fact that many of the clowns’ names — Twinkles, Shotgun, Blinky — would almost be plausible in a straight-up gangster flick is proof positive of the concept’s twisted logic.

The cast is admirably committed to this madness, going over the top as befits both noir acting and clowning but never winking at the audience. Standouts include Kelley Rae O’Donnell as Petunia, the sad clown whore; Jessica Frey as Popo, a lean mean clown killing machine; and Noah Zachary as Dusty, the bar singer whose gloomy tunes (co-written by Szymkowicz and Adam Overett) include such lyrics as, “I don’t want to find out if there’s a heaven for clowns.”

Director Andrew Neisler skillfully stages the action in every corner of the Parkside’s performance space, with the audience seated at cabaret-style tables and around the edges (though the sight lines were not totally ideal for someone, say, under 5’2”). There is some audience interaction, but none of it involves having to paint one’s face or assume any major clowning duties. Obviously this would be the wrong show for someone who suffers from coulrophobia; however, if you’re in that group that finds clowns more annoying than terrifying, Clown Bar can still work for you: it does, after all, feature multiple clown deaths. You can laugh with the denizens of Clown Bar or at them, but either way, you’ll likely laugh quite a bit before it’s over.

(Clown Bar plays at the Parkside Lounge, 317 East Houston Street at Attorney Street, through April 12, 2013. Performances are Fridays and Saturdays at 9PM. Tickets are $18 and are available at brownpapertickets.com or by calling 800.838.3006.)