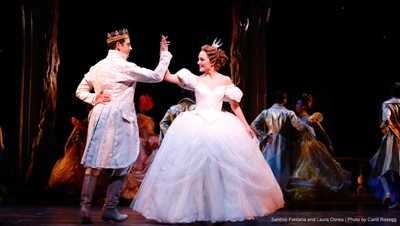 BOTTOM LINE: Not your grandma's Cinderella, but not a far departure.

Rodgers and Hammerstein's Cinderella is a fan favorite from way-back-when (1957, to be precise). Not to be confused with the Disney version (of which the animated film premiered in 1950), the R&H version includes more music (a different score entirely) and has been seen on screen and on stage, in many incarnations therein, although this is actually the first time it's appearing on Broadway. This production features a brand new book with an updated take on the beloved fairy tale by the sassy playwright Douglas Carter Beane. Despite a contemporary vibe and a decidely more interesting back-story (featuring the town's socio-political conflicts), it's still the tale we know and love: perfect for all ages and as sweet as ever.

Directed by Mark Brokaw, this Cinderella revival features a completely delightful cast: doe-eyed Laura Osnes as Cinderella; the always charming Santino Fontana as the prince; Broadway veterans Victoria Clark and Harriet Harris as Cinderella's Godmother and Evil Stepmother, respectively; and a fantastic ensemble who are almost constantly utilized by Brokaw and choreographer Josh Rhodes. No one has it easy on that stage, particularly with Rhodes's sweeping choreography that employs a balletic sensibility and lots of partnering. It's grand and it's beautiful, everything we expect traditional musical theatre to be.

A funny thing happens while watching Cinderella. The story is about magic (or whatever divine powers the Fairy Godmother possesses) and that sense of wonder is certainly present in the production. But the show's magical moments are strongest when they are simpler. For instance, William Ivey Long's gorgeous costumes literally transfrom before your eyes, and Brokaw's slick direction turns maid into princess with the snap of a finger. This "stage magic," as you could call it, is remarkable and speaks to the power of live performance and the inherent magic that lies within really creative theatre artists. But this Cinderalla revival was also bitten by the "Broadway blockbuster" bug, and sometimes takes advantage of technological magic, for example, a large moving tree villian who gets killed in the first scene (making me wonder if maybe I didn't really remember this story after all). Although touches like this are cool, in the case of this production it's the antithesis of the real magic that can be made on stage. And since we get to see both kinds of magic in this Cinderella, it's all the more apparent that bells, whistles, and flying Fairy Godmothers aren't necessarily the best option. This production shines brightest when it's allowed to just be itself.

Beane's book gives ample opportunity for the characters to reveal sweet and truthful emotional capital. These aren't one-dimensional cartoon princes and princesses. Jean-Michel (Greg Hildreth) is the town rabble-rouser who makes some very convincing points about the royal family not doing enough for the townspeople. Dismissed by many as a loon, he has Cinderella's ear and her respect, and when she gets an "in" with the prince she uses the opportunity to tell him about Jean-Michel's views. The prince, who wasn't previously aware of the class system, seizes the opportunity to get to know the commoners and evoke change in the name of equal opportunity. It's a nice touch to the fairy tale trope.

Cinderella's parts are successful individually, but they don't always line up to create a cohesive final product. For instance, the book seems like it wants to be a parody while the choreography is completely straight-laced. That dancing tree I mentioned earlier brings a certain sensationalism yet the forest animal puppets look like they came straight from the Toys R Us shelves. And the story drolls on about 20 minutes too long. For what it's worth, this Cinderella has a lot to offer for all members of the family. And the costumes...they are pure magic.

(Cinderella plays at the Broadway Theatre, 1681 Broadway, in an open run. Performances are Tuesdays at 7PM; Wednesdays at 2PM and 7:30PM; Thursdays at 7PM; Fridays at 8PM; Saturdays at 2PM and 8PM; and Sundays at 3PM. Tickets are $45-$147. To purchase tickets visit telecharge.com. For more show info visit cinderellaonbroadway.com.)