Tickets are available at chaos.brownpapertickets.com

Chaos, and Other Wordly Possessions 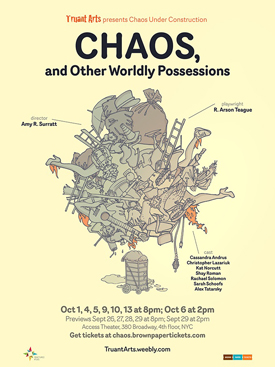 BOTTOM LINE: An experimental, existential piece that is surprisingly accessible and fun.

I didn’t know what to expect when I went to see Chaos, and Other Wordly Possessions this past weekend at the Access Theater. I knew it was a product of a collaborative workshop initiated by Truant Arts earlier this year. I knew that the play originally sprang from four words and two hours of experimentation involving actors, directors and writers. I knew that the playwright, R. Arson Teague, wrote his script based on that one day of exploration. And I knew that his resulting play -- one of five plays premiering as part of Chaos Under Construction -- was fine-tuned in the past months through a series of readings, audience feedback and further collaborative work. I was intrigued by this unusual process, and interested to see what the results would be.

Then I read the notes from the playwright in the program and my interest turned to fear. “The thing to do, this troupe of players says in this play within the greater play we call life, is to turn around,” Teague writes. “Head East. When the linear fails, find the circle; the infinite point; the instant when everything exists -- and doesn’t.”

Oh no, I thought. Oh no oh no oh no. This is one of those Big Idea plays.

Don’t get me wrong; I am generally a fan of Big Ideas. They are fun to argue about at parties. I just find that sometimes...okay, often when a playwright tries to translate Big Ideas into an evening of entertainment, the results can be a bit pretentious, messy, and -- worst of all -- boring.

However, when the lights dimmed and Chaos, and Other Worldly Possesions began, a single member of the ensemble (Cassandra Andrus) stood before the audience and encouraged us to drink. The play, she assured us, would be better if we drank. I knew in that moment I had nothing to fear. Any show that is self-aware enough to encourage boozing was going to be fine.

The plot of Chaos, and Other Worldly Possessions (as it were) takes place in a single evening on a stalled G train car. Six passengers (Andrus, Kat Norcutt, Sarah Schoofs, Rachel Solomon and Alex Tatarsky) wait to resume their journey while an invasive homeless man (Christopher Lazariuk) disrupts any peace the weary travelers might enjoy. Throughout the evening, scenes from the travelers’ lives are revealed. It is soon clear that the train will never regain momentum, despite the insincere assurances of the Conductor (Shay Roman). Time and space break down as each passenger confronts her own paralyzing hopes and fears.

Of course a tale of existential angst would take place on the G train.

Though it may sound like a heavy offering (BIG IDEAS), Chaos, and Other Worldly Possessions is surprisingly playful. The play subverts and inverts theatrical conventions to the point where the fourth wall becomes little more than a suggestion. Teague wisely injects his text with moments of unforced humor, making the darker turns in the play easier to digest. Director Amy R. Surratt stages the proceedings with a lot of fluid movement. The play may take place in a stalled train car, but the performance itself never feels stalled. The collaborative nature of the creation of this show has also given the actors a level of comfort with themselves, the text, and each other. Despite the stylized nature of the play, no moment ever feels forced or unearned.

No performer strains to be the “stand-out” in this show. The ensemble work is incredibly strong. Lazariuk’s turn as an unhinged master of ceremonies, however, deserves special mention. His performance flirts with danger and madness, and is genuinely exciting to watch. I was also impressed by Tatarsky who did solid work in a number of different roles. Roman, meanwhile, as the omnipresent, could-give-a-sh*t voiceover, is hilarious.

Even if experimental work is not normally your cup of tea, I would give Chaos, and Other Worldly Possessions a chance. It’s a very entertaining, thoughtful piece of theater. The show impressed me enough that I plan on checking out the other plays in Chaos Under Construction, which are playing in rep with Chaos, and Other Worldly Possessions. Thank you, Truant Arts, for your mad experimentations. And for the drinks.