The Boat in the Tiger Suit

Off Off Broadway, New Play
Runs through 8.31.13
The Brick Theater, 579 Metropolitan Ave, Brooklyn 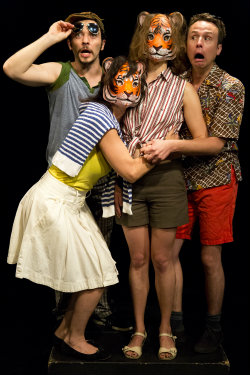 Nic Grelli, Maggie Bofill, Diana Stahl, and Brian McManamon in THE BOAT IN THE TIGER SUIT. Photo by Hunter Canning.

BOTTOM LINE: An emotionally disconnected family at a funeral. Relationships form and are broken in the midst of one-liners.

What a strange hour I had sitting in the audience for Hank Willenbrink's The Boat in the Tiger Suit. The show deals with such ridiculous situations and severe topics, yet has wonderfully intriguing characters, on top of the fact that I felt like I was watching stand-up comedy at certain points.

The Boat in the Tiger Suit begins with a funeral on a boat for a man named Herman. Five people are in attendance, including his son Rene (played by the quirky and endearing Nic Grelli) and one of Herman's army comrades Gene (played by the enthralling Bobby Plasencia), whom Rene is attempting to seduce. On the other end of the spectrum is Herman's daughter April and her on and off again partner, and father of her child, Dave (played by Diana Stahl and Brian McManamon). The final attendee is Herman's widow Margaret (played by the wonderful Maggie Bofill).

Emotions run high as relationships are brought into question. What lines should or should not be crossed? Do we owe the most to ourselves, our country, or our family? Is a family enough to keep a relationship intact? Are relationships still important to us if we do not take the time to maintain them? To what lengths will we go for the ones we love? The audience observes all of the characters' struggles, ensnared and connected by strands of questions and affections.

The set seems quite low budget, but it does its job to indicate the environment. Due to suspended time with Herman's spirit (played by Hugh Sinclair), I think it was a wise decision for the production staff to not add any extraneous elements. It serves as a blank canvas for Sinclair and the lighting designer to create the impressions necessary for pauses in time, as well as for moments when individual characters have interactions with the deceased.

When I was in school for theater, part of our required curriculum was a series of theatre history classes. The wealth of knowledge with which I departed from those classes was astounding, though despite the hundreds of plays we read with our esteemed professor, I state with my depth of knowledge that this show consists of a plot that I find novel. Willenbrink's technique for simultaneously written conversations confused me a bit, but I was definitely in awe of the situations his mind created for us. Despite all of the difficult and painful topics, he still manages to write hilarious lines that border the line of shock value and “WTF.” I must admit that the show dragged a bit, but albeit the long hour it was oddly enjoyable.

These actors really immersed themselves in their roles and I felt like they were just having so much fun on The Brick Theater's stage. Laughter is infectious and they infected many people with that opening night performance, including myself. It makes me so happy to see people trying new things and loving what they do, and I was able to see both those elements at The Boat in the Tiger Suit.

(The Boat in the Tiger Suit plays at The Brick Theater, 579 Metropolitcan Avenue, Brooklyn, through August 31, 2013. Performances are Thursdays, Fridays, and Saturdays at 8PM. Tickets are $18 and are available at bricktheater.com or by calling 718-285-3863.