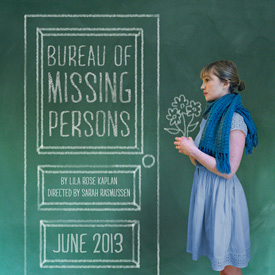 BOTTOM LINE: A perfect light choice for a summer evening at the theatre.

Escaping from the sweltering New York summer, I was delighted to sit in a cool theatre and enjoy a play that was light and creative, but substantial enough to leave feeling satisfied. Lila Rose Kaplan’s Bureau of Missing Persons was inspired by the stories of Jorge Luis Borges, and is full of the ambiguous plot twists and twinkling ironies of the great Argentinean author.

Angela (Maren Bush) appears first as an eager grade-school teacher, starting the play off with a plucky monologue to her class as they get ready for a trip to the zoo. This turns out to be a fateful day, and we immediately flash-forward a year ahead, when Angela has suffered a nervous breakdown, spending her days hidden away inside knitting scarves. Her fiancé Richard (Ryan McCarthy) and mother Vivian (Pamela Shaw) are both fed up with her refusal to leave the house, and both threaten to abandon her. Through some rather devious machinations, her ‘decorator’ (Lucy DeVito) manages to introduce her to a kindergarten teacher named Simon (Neimah Djourabchi), a man with mysteries of his own. While the main story focuses on Angela and Richard, both Shaw and DeVito are particularly memorable in their oddball roles.

Director Sarah Rasmusen uses the talented cast well, keeping a quick pace that never allows us time to question the fantastic, if contrived, plotline. The production gives us just enough information to piece together the logic of this rather unusual world, but leaves enough questions to keep an audience intrigued. Kaplan’s script keeps surprising, even while wisely sticking to a lean plot structure. Still, this is sometimes at the expense of the emotional content, which often pales next to the expertly delivered zingers. Even in this tale of loss, the tone is almost always light and perky, enjoyable to watch, but less convincing in moments of catharsis.

If the script won’t satisfy everyone, as a piece of theatre the evening is extremely well crafted. The brilliantly simple set and costume design by Moria Sine Clinton compliment the story across shifting locals.  Green chalkboard walls serve as an apartment, a kindergarten classroom, and with the help of Angela’s knitting, an abandoned cave outside Moscow. The characters sometimes draw on the walls and floors, creating pictures that are both real and imaginary, depending on the viewpoint of the character.

Inventive and swiftly moving, The Bureau of Missing Persons is a perfect choice for a summer evening at the theatre. A show that will make you laugh and think, and like all good Borges stories, leave wondering exactly what happened.

(Bureau of Missing Persons plays at the NYTW’s 4th Street Theatre, 83 East 4th Street, through June 29, 2013. Performances are Mondays through Fridays at 7:30PM and Saturdays at 2PM and 7:30PM. There is no performance on June 26th. Tickets are $18. To purchase tickets visit SmartTix.com or call (212) 868-4444. For more information visit neighborhoodproductions.org.)