$16.25 Student "No Rush" tickets are available to all students the day of or in advance of performance date. Two tickets per valid ID, cash or credit accepted, subject to availability. 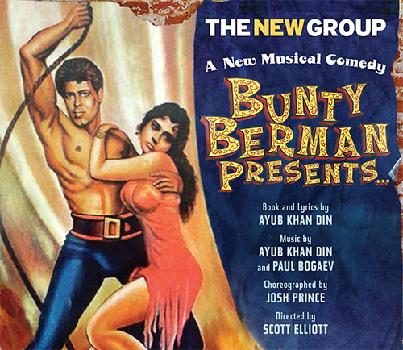 BOTTOM LINE: A new musical in the spirit of Golden Age Bollywood.

Fade in on a fading star at a faded studio in the latter years of Bollywood’s Golden Age. Bunty Berman (Ayub Khan Din) has presented the best of Hindi films for years, always starring legendary hero Raj Dhawan (Sorab Wadia) and always taking audiences by storm...until lately. After a string of flops, the financing has dried up, the reviews are bad, and the best friends must confront reality. Raj must face that he has washed up while Bunty faces the prospect of closing the film studio he built over a lifetime. Meanwhile Bunty’s long-time assistant Dolly (Gayton Scott) is desperately in love with her boss and Bunty’s leading lady Shambervi (Lipica Shah) is trying to hide her heart from Saleem (Nick Choksi), the tea-boy who is also her devoted childhood flame and aspiring hero. If Bunty gets in bed with mob boss Shankar Dass (Alok Tewari) to save his company, will everyone find their happy ending or just meet their end?

This finale to the New Group season seems designed to go out with a bang. Bunty Berman Presents presents heart, romance, hilarity, danger, and all the ingredients Bunty himself would have thrown into a come-back blockbuster. The narrative is thick with secondary plots, the dialogue rife with puns, the staging stuffed with slapstick, and the lovelorn is worn by not one, not two, but four couples! (Three couples? You decide.) Taking twists and turns and always having another character to fall back on, Bunty Berman Presents never comes up short in its constant kaleidoscope of songs, dance, jokes, and Bollywood flavor.

In his program note, director Scott Elliot highlights the cultural specificity of the musical, which “manages a marvelous mash-up of cultures, which is realistic to a Bombay film industry that combined Hollywood dazzle with this audience’s traditional values.” In fact, it is this glimpse into a past time and place that makes Bunty Berman Presents most interesting, and the script succeeds in relating the material to contemporary audience without undermining the values and traditions of the time. Din’s work respects the values and customs of 1950s India despite being written for a 2013 New York City audience.

The design for Bunty Berman is somewhat sparse, particularly considering the allusions to the rich spectacle of Bollywood, although one could argue that the stark set coincides with the financial troubles at the center of the plot and is meant to contrast with the opulent costumes. That argument is theoretical, however, as I did not actually GET that impression from the production; I conjectured the possibility. Bollywood-esque or not, Derek McClane's set is smart, making ingenius use of the limited space to create endless nooks on varying levels; William Ivey Long's costumes are characteristically beautiful, sparkly, and I want to steal them; and David Lander's lighting is gorgeous and dynamic. Best of all, there's a fabulous elephant on stage, and all you need to know is that it's fabulous!

Like many premiere works, there are kinks in the reel for Bunty Berman Presents. The jokes don’t all land, some of the songs are less memorable than others, and some audience members liked it better than others. And while there were a few who left at intermission, those viewers who found something they loved in Bunty Berman Presents stayed to the end and gave a rousing ovation. And isn’t that why we have company’s like The New Group? To support and nurture a new musical through rehearsals, previews, beyond? So audiences can find something new to love, and artists can find new ways succeed?

(Bunty Berman Presents plays at The New Group at Theatre Row, Acorn Theatre, 410 West 42nd Street, through June 1, 2013. Performances are Mondays through Wednesdays at 7PM; Thursdays and Fridays at 8PM; and Saturdays at 2PM and 8PM. Tickets are $61.25 and can be purchased at telecharge.com or at the Theatre Row box office.)