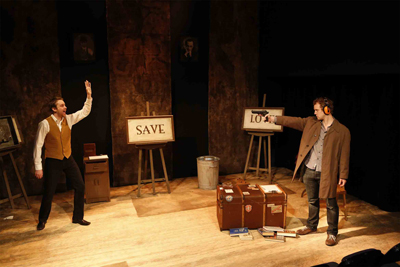 Rob Drummond on the left in BULLET CATCH.

BOTTOM LINE: This show rules. Period. An hour and fifteen minutes of sheer, unadulterated 'what the hell is about the happen' terror. Good work, Scotland.

Bullet Catch is hard to categorize or even summarize. It's more of an event than anything else, hosted by a subdued man in a gold vest and bow tie, the trappings of a magician, but what is he selling? I do not know. I do know that it is awesome.

The premise of the show (a transplant from the Edinburgh Fringe Festival NOW in 59E59 Theatre's annual 'Brits Off-Broadway' celebration) is duplicitously simple. The magician (Rob Drummond), invites you to participate in the deadliest magic trick ever invented, the magic trick Houdini himself refused to attempt, the Bullet Catch. This trick involves a volunteer from the audience shooting a gun at the magician, and the magician, instead of getting his face blown off, catcheing the bullet in his teeth. Daredevil chicanery if I ever heard it, but according to the press release and internet, this trick has claimed the lives of at least 12 people since the first attempt in 1613, so its got quite a history of not going according to plan. Robert tells us that he will have persuaded one of us, an unsuspecting audience member, to perform the bullet catch with him by the end of the show, and then asks for a volunteer. Unsurprisingly, no one seems inclined to join him onstage.

Robert doesn't let that deter him, and immediately reduces the risk of the situation, thereby putting us at more at ease. He builds into a rythym evenly, and quietly, never raising his voice above a soft-spoken Scottish burr, steadily increasing the level of illusion and magic, and it is engrossing as all get-out. By the time we got to the aforementioned climactic illusion, I was, quite literally, on the edge of my seat. I was nervous and shaking and just as terrified as I am when I watch horror films. I could not look away. And by the way, the choice to put this show in an itty-bitty black box only increased the awesome. As the show progressed, the theatre got more and more claustrophobic, and by the time Rob pulled out the gun, the theatre felt like it had shrunk 5 feet on every side.

The 'volunteer' (or perhaps it would be more appropriate to say co-star) plays just as big a role in the show as the magician. Rob gets his man/woman -- the poor bloke onstage for my show was another soft-spoken middle-aged Scotsman with grown children who used to work in computers -- and then uses said volunteer as his assistant, his foil, and his confidante. I felt like I got to know this man in a very deep and personal way, which is part of the show's very well-executed intention. By the time the Bullet Catch itself rolled around, Rob gave our intrepid volunteer one more chance to escape the illusion. You don't have to do it, he told him, it's entirely up to you. He gave him the chance to sit down, he gave him the chance of not firing a weapon at a total stranger, or even at a man whom he'd formed an uneasy friendship with.

Can you guess what this mild-mannered, soft-spoken, self-professed happy man said when faced with the choice of firing the gun or not? 'I've come this far, might as well'

Magicians are salesmen. They convince you to buy into the magic, to believe. I was locked in a tiny space and a huge experience where I did not know what was going to happen next, because I bought into the magic, and I loved it. The illusion of danger in an unexpected space is both terrifying and wonderful, and that's what I love about this piece; that assumption and presumption of safety. Obviously, we're in a theatre. We've got tickets. We're going to see a play. it's a safe space. Nothing is going to happen. The theatre would not put on a show where there was an actual bullet fired. I'm a theatre administrator, I know the rules. But from the very first moment of Robert stating his purpose and intent of gathering us together, I couldn't help but wonder, and wonder, and wonder some more -- and that is the glory of this show. The illusion that you are safe is really what the Bullet Catch is all about. Are we safe? Are we ever?