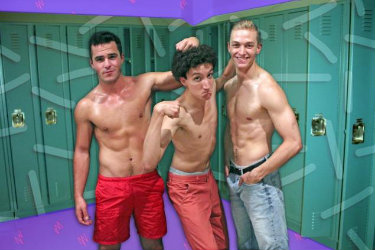 BOTTOM LINE: An R-rated parody of "Saved by the Bell."

When I reviewed Bayside! this time last year, its subtitle was "The Unmusical" and it was an intermission-less show at the Kraine Theatre. Now simply subtitled "The Musical," Bayside! is back — shaken up with a slightly different cast, two acts instead of one, and a new home at the much larger Theater 80 on St. Marks Place. The parody, while not as sharp as its one-act version, certainly remains as raunchy as before and features a slew of standout performances.

Being a fan or at least part-time viewer of "Saved by the Bell" will certainly enhance your experience, but even if you’ve never seen the cult classic you won’t have trouble navigating the über basic plot in Bob and Tobly McSmith’s creation. The musical sees the seemingly only students of Bayside High deal with a major crisis: the Max, everybody's favorite hangout (well, only hangout — as we learn in a hilarious song detailing SBTB’s low budget) will close unless $500 is raised. Whatever shall they do? Insanely weird talent competition? Yup. Insanely creepy exercise video? You betcha. The McSmiths adequately toss in the most bizarre yet loveable aspects of the TV show (the above, plus Zack stopping time, Screech’s whacky interjections, Jessie’s caffeine pill addiction).

Sadly, the show suffers from its extension into a two-act comedy. There was a wham-bam quality to the action in its 80-minute rendering that was spot-on. The ideal length for a parody, it left you wanting more. Here, moments become repetitive and stale, making it much easier to notice the script’s flaws (i.e. naughty-talking characters but not as many finished jokes with punchlines).

Regardless, Bayside! is a major showcase for its actors. Sam Harvey is perfect as Zack, the coolest guy in school. It’s particularly entertaining to observe Harvey play up Zack’s naivety to Slater’s homosexuality, swiftly brushing it off and returning to his own issues. Maribeth Theroux shines as Kelly, rising above her typically dumb-blonde dialogue. When Theroux’s Kelly finishes her act in the talent show and simply stands there smiling inanely...it’s pure gold. John Duff commendably goes all-out as Slater, although his jeans in Act Two almost steal the show from him. Justin Cimino remarkably impersonates the dim-witted Screech. Shamira Clark, fierce and committed, once again gets a huge ovation as her Lisa performs a rap about ‘white devils everywhere.’ And April Kidwell, who brought the show to a whole other level last year, returns as Jessie. There are simply no words to describe the sublime hilarity that fills the theatre when the gutsy, confident and outrageous Kidwell engages in the most peculiar(ly beautiful) interpretative dance ever staged.

At the end of the day, grabbing some drinks and seeing Bayside! with a huge crowd is a damn fun way to spend a weekend evening. You may forget the lyrics to most of the songs, but you won’t forget its eight shining stars.

(Bayside! The Musical plays at Theater 80, 80 St. Mark's Place at First Avenue, through December 28, 2013. Performances are Thursdays through Saturdays at 8PM. Tickets are $25 and are available at ovationtix.com.)