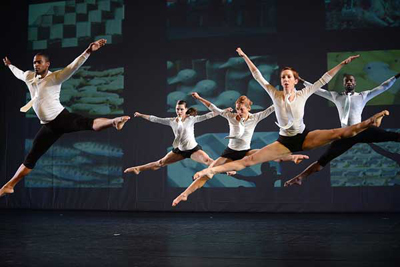 Battery Dance Company performed at 3LD Art and Technology Center last week topping off it's 37th season. The choreographer/director Jonathan Hollander delivered a very poignant speech about the mission of the company -- to bring their education program Dancing to Connect around the world and showcase NYC dance. The dance world needs more ambassadors like him.

For the first time, Hollander brought a choreographer in to work with the dancers. Jacek Luminski's piece, "Not All Those Who Wander Are Lost," started with subtle movements breaking into moments of quick, thrashy, showy movements. There were moments of connection and repeated partnering phrases, but the moments of dance that really stuck out were the short solos. We got to care and know about each of the five dancers in this company very much. They all have their own styles. Carmen Nicole -- the aggressive powerhouse; Robin Cantrell -- a delicate waif with gracious lines; Mira Cook -- a stunning presence who moves with ease; Sean Scantlebury -- a knife-like mover; and Clement Mensah -- a relative newcomer to Battery bringing force and grace and stealing the stage only when he's supposed to. They create a sort of dystopian family and at the end it had a feeling of a music box winding down gently repeating the highlight moments of brief encounters. Each dancer slowly left the stage with a renewed purpose, seemingly to say that our moments of spatial confusion are like moments of incubation for clarity. The women's costumes -- beautiful house dresses -- were unique, but the men's costumes felt less individuality with green pants and similar v-necks. The music of Pawel Szymanski, John Zorn and Andy Statmen is spliced and faded so seamlessly so that I didn't even realize the music had changed. That was a first for me in a concert.

A revival of "Shell Games" from 2005 had altered the casting from three men and two women to three women and two men. The costumes by Sole Salvo were beautifully lit by Barry Steele -- stainless steel shells that dancers move in and through. They writhed inside them as if uncomfortable in their own skin but with each other's guidance feel freedom. They seemed as if they were floating for moments as they skittered across the floor and then once out of the dresses, they seemed to skip like stones. It had a very visceral feeling. The shells create an inner circle for the dancers to move through and around and they take on all the impressions of a set.The jazz music by Frank Carlberg added agitation and one of my favorite parts was when the music got very turbulent with the rhythm section as the men begin to fight in a capoeira-esque style. Also, Christine's vocals contained so much yearning and pain. "I am that I am" she sang over and over as if possessed. At the end, they began gesticulating throwing stones at the back drop and one sensed that feeling of self-loathing and the cathartic feeling of abandonment. A well-danced program!

(Battery Dance Company played at 3LD Art and Technology Center through May 23, 2013. For more information about the company, visit batterydance.org.)