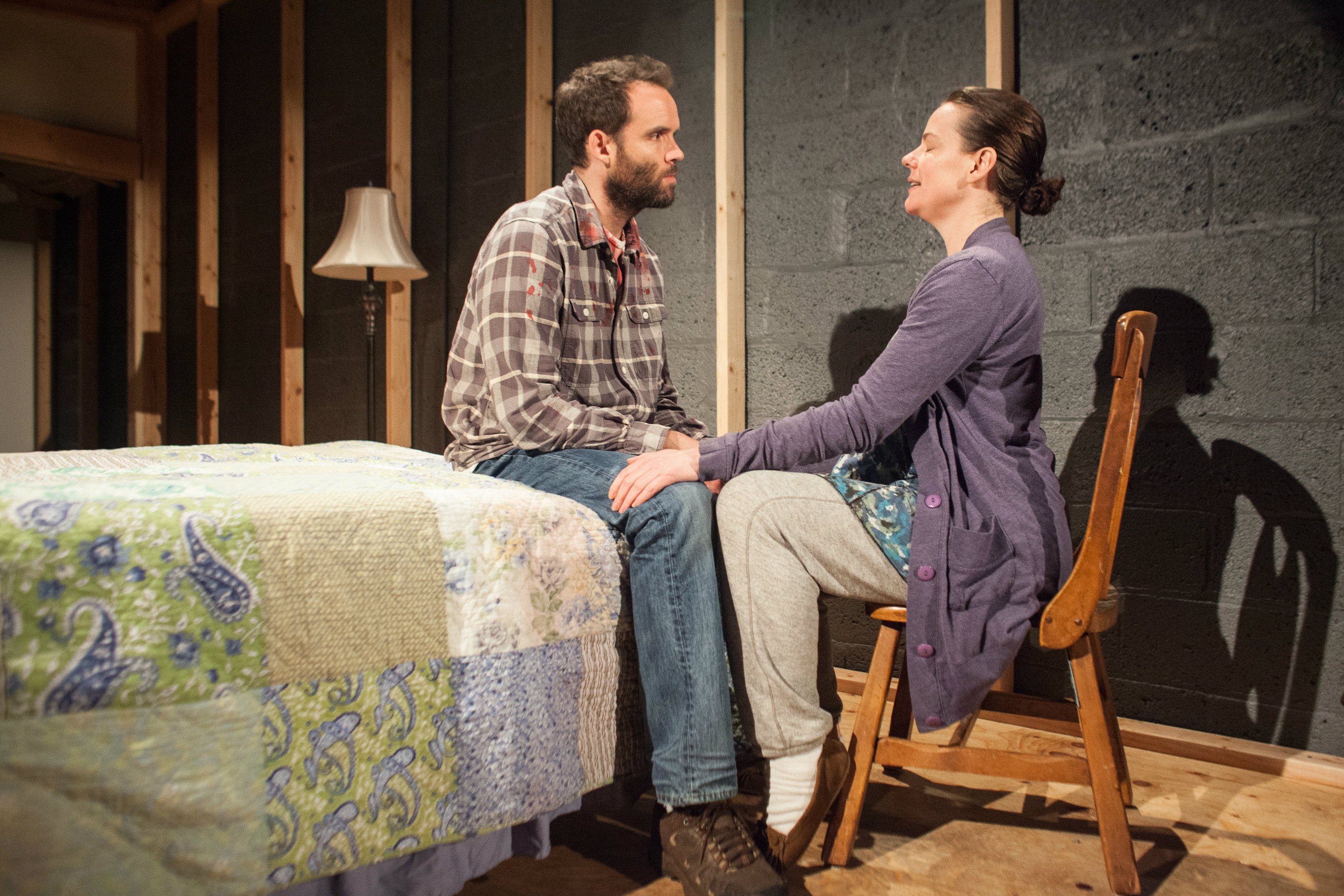 BOTTOM LINE: This story of a family struggling to weather a deadly storm is given an excellent production that succeeds on all accounts.

The set may be crumbling before our eyes, but Clare Barron’s new play is a solid structure with the potential to weather any impending storm. Wind blows through the skeletal wooden scenery, rattling window slats, bringing trees down, and leaking water and dirt into Daniel Zimmerman’s deceptively simple set. The modest home on stage is hardly a prepossessing visual, however, under the directorial hand of Portia Krieger, some miraculous happenings are underway at The Wild Project, where Clubbed Thumb’s production of Baby Screams Miracle, is currently playing.

Baby Screams Miracle is the first of Clubbed Thumb’s 2013 Summerworks series, and they are off to a terrific start! The play takes place in the home of Carol and Gabriel in Eureka, Washington, where they live with their 6-year old daughter, Kayden, and Carol’s mother, Barbara. The pregnant Carol (played with riveting layers by Danielle Skraastad) somewhat ambivalently prays with her devoted husband (portrayed with unflinching amiability by Danny Wolohan), who seems to have more of an investment in his religion, not to mention his marriage and his family. When the couple retires to bed, ominous clouds sweep across the stage (projections by Bart Cortright), representing the encroaching storm that will soon uproot the trees, the home, and the lives of this unsuspecting family. Right on the heels of this violent storm, comes the arrival of Cynthia (a marvelously oddball Susannah Flood), the 26-year old (also pregnant) daughter of Carol and Gabriel. It is soon learned that Cynthia was conceived when her parents were teenagers, and given away shortly after her birth. Although Cynthia keeps in loose contact with her biological family, her arrival tilts the dynamic as they struggle throughout the storm.

Barron’s play weaves together ideas of love, patience, and forgiveness set amidst a world of chaos and mayhem. The storm is the loudest and most rageful character in the play; while the humans seek to stifle and cover up what may be bubbling underneath the surface of their fraught personas. Much to Barron’s credit, she turns the storm into more than a natural occurrence--it also serves to amplify the inner lives of the family, and move the action forward in both a literal and metaphoric way.

Krieger’s direction breathes life into Barron’s text, in a highly theatrical production that utilizes scrappy raw materials. Through Krieger, Barron’s affecting piece hits all the right marks. From the technical elements, to the fleshed out acting performances, to the staging, to the script itself, Baby Screams Miracle is an incredibly worthwhile piece of theatre. It would be cliche to say that one will be “blown away” by this production or “swept off one’s feet,” but the sentiment still applies, and the accolades are deserved. Baby Screams Miracle is a testament to the ambition of Clubbed Thumb, and it also demonstrates the necessity of producing works by emerging writers like Ms. Barron. I can hardly think of a better reason to travel to the Lower East Side.

(Baby Screams Miracle is playing at The Wild Project, 195 E. 3rd Street, between Avenues A and B, through June 2, 2013. Performances are nightly at 8PM. Tickets are $18, or $15 for students, and can be purchased online at clubbedthumb.org or ovationtix.com.)