Written and Performed by Adam Wade

Off Off Broadway, Storytelling
The second Monday of every month
UNDER St. Marks, 94 St. Marks Place 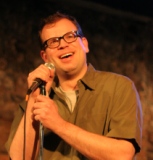 This homegrown affair springs from the mind of Adam Wade, an old photo of whom is prominently displayed on a screen above the stage to greet the audience as they settle into their seats, while Roy Orbison songs play in the background. Wade introduces his show by saying “I’m Adam Wade from New Hampshire” and kicks off the hour with a New Hampshire trivia question. One eager audience member didn’t need but a few seconds before providing the answer for the state bird (the purple finch) and earning a beer. The prize came courtesy of the bar in the back and Wade made sure to thank the bartender multiple times throughout, as well as the guy in charge of cueing up the videos employed in the show. In one last display of civic pride, he sang the New Hampshire state song.

Each month, Wade's show features a guest storyteller to start the evening and for the performance I attended it was Dawn Fraser, a NY-based humourist. The 23-year old, she had a lot of enthusiasm, but dropped the word “like” countless times. As Wade segued into his first story about his vacation visiting his aunt in Florida, it was easy to see the difference between someone newer to storytelling and the polish that comes from more than a decade of practiced skill. He shot video of the ride from the airport and included subtitles such as “weather forecast” when the two discussed the temperature for the day ahead, which got big laughs.

Wade then traveled back to his childhood, relating a universal story of the unrequited love of an older girl, and schoolyard bullies, incorporating both his love of Roy Orbison and his illustrations of cats as stand-ins for the people involved to help fully realize the youthful drama. But not all of the narratives are tinged with pathos. In another, we learned of his status as class pet who had the honor of cleaning the blackboards every day before a joke went awry and he fell out of favor with his teacher. But then we saw another side when he came to her rescue after a freak classroom accident left her unconscious.

He concluded with an upbeat story, again involving a girl and this time, her disapproving father as his romantic foil. But this one came with a note of triumph as Wade, driving his family’s purple Mercury Cougar, got a little action in the front seat.

(The Adam Wade from New Hampshire Show plays at UNDER St. Marks the second Monday of every month at 7PM. Next show is April 8, 2013. Tickets are $5 and are available at horsetrade.info.)