Around the World in 80 Days

By Mark Brown; Directed by Rachel Klein
Based on the novel by Jules Verne
Produced by YOW! Theater Company 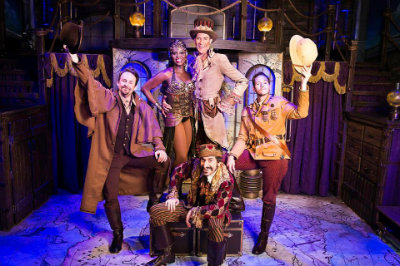 This show is a blast. From the moment this tight, five member ensemble steps on stage until the final bows, Around the World in 80 Days races along at top speed. YOW! Theater Company’s production truly captures the spirit and thrill of Jules Verne’s 19th century novel on which this adaptation is based.

It all starts with a discussion over a newspaper article at the Reform Club in London in the late 1800s. The article supposes that it would be possible for someone to travel around the entire planet in as little as 80 days. This calculation comes from the theory that there are enough trains and boats connected to each other to carry a passenger completely around the world. Phileas Fogg (Bryce Ryness), ever the gentleman, makes a wager with his fellow club members that he can do just that. And not only will he do it, but he will leave that very night. Meanwhile a conveniently timed bank robbery occurs. The thief vaguely matches Fogg’s description. And since Fogg is about to mysteriously leave the country, suspicions are high. As Fogg disembarks with his trusty servant and companion Passepartout (John Gregorio), the hilariously bumbling Detective Fix (Stephen Guarino) follows his trail.

Along the way the acrobatic Passepartout and stoic Fogg encounter various obstacles, making Fogg’s wager harder to achieve than he originally thought. At one point the pair halt their journey to save Aouda (Shirine Babb) from being burned alive at the stake. Indebted to Fog, she joins the adventurers, making it a trio. Jimmy Ray Bennett fills in the rest of the roles, including everything from an ignorant cowboy in San Francisco to a British thrill-seeker in Bombay to a tap dancing sailor in New York. Rabb, Gregorio, and Guarino occasionally step in to other roles as well, however it is Bennett’s masterful character work that really shines.

Every member of the ensemble’s physicality is crisp and precise. At times the actors speak incredibly fast, tossing witticisms and exposition amongst themselves, but not a single word is lost in the shuffle. The energy and commitment behind this piece is absolutely remarkable. That same commitment is also apparent from Rachel Klein’s spot-on direction, implementing simple props to fill out the setting. For instance, while traveling across the Midwest, the actors’ parasols become the wheels of the locomotive they board. Around the World in 80 Days is full of creativity on all fronts, and numerous, clever comedic bits keep the laughter rolling in.

It would be a loss not to mention the design team for this production. As the audience enters the theatre they are literally immersed in the set, designed by Robert Andrew Kovach. The walls are painted to match the elaborate but economical steam-punk design of the stage. Many lighting cues, designed by Ben Kato, lead to big laughs and serve to heighten tense moments. Finally, Kate Freer’s projections, on a large, round projection screen, provide the audience with maps of Fogg’s journey and a ticking clock, among other images, to remind us of the race at hand.

This show is an immensely good time. It is a fine example of ensemble acting excellently paired with a visionary design team and director. Around the World in 80 Days is perfect for families. The show is enjoyable, entertaining, and adventurous, engaging the imagination as well as the intellect. By the end of Around The World in 80 Days it felt as if I too had been around the world, but in only 2 hours, and that’s something worth commending.