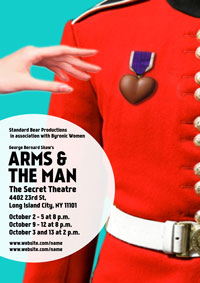 BOTTOM LINE: A time-tested classic is given the production it deserves.

I am becoming a huge fan of The Secret Theatre, a Long Island City institution since 2007. In its short life, The Secret has played host to an incredible variety of work. The Queens Players stage several classical productions at The Secret every year, and in 2012, the theater housed the world premiere of Mac Rogers' sci-fi epic Honeycomb Trilogy among other innovative work. It’s safe to say that Long Island City does not want for theatrical diversity (good news for me, since it considerably cuts down my commute time).

This weekend, this most wonderful theatre below the 7 train is housing Standard Bear and Byronic Women’s production of Arms & The Man, a delicious piece by George Bernard Shaw.  If the only Shaw play you’ve ever seen is Pygmalion via the musical My Fair Lady, you owe it to yourself to expand your horizons this weekend at The Secret.

(Weird bit of theatrical trivia: Shaw allowed Arms & The Man to be adapted into the operetta The Chocolate Soldier but was so disappointed with the results that when someone wanted to do a musical adaption of Pygmalion, he refused. So, remember: every time you see a production of My Fair Lady, you’re kind of implicitly kicking Shaw’s ghost in the face.)

Arms & The Man takes place during the Serbo-Bulgarian War in 1885. Raina Petkoff (Kacie Laforest) is engaged to Sergius (Brian Wallace), and then a Swiss, chocolate-loving mercenary named Bluntschli (Alain Laforest) seeks refuge in Raina’s home. Bluntschli is kind of a wuss, but a loveable wuss, and soon Raina’s emotional fidelity is thrown off balance. It does not help anything that Sergius begins macking on the Petkoff’s maid Louka (Julia Jones), but it does provide Shaw an opportunity to make a comment on class. Shaw really loved to make comments on class; in this play he gets to make comments about class and war. Don’t worry. It all goes down as easy as one of Bluntschli’s beloved chocolates. Victoria Bundonis, John Kinsherg and Morgan Hooper round out the cast as Raina’s mom, Raina’s dad, and Raina’s manservant, respectively.

I saw Standard Bear’s last production, which also appeared at The Secret: the claustrophobic apocalypse dramedy Zombies. It’s really nice to see the depth of their talent with a production so different in text and tone. Byronic Women is fairly new to the theater scene and is the creation of actresses Laforest and Jones. They formed Byronic Women as a way to explore women’s roles in classical drama. Both companies lend their considerable strengths to this lovely production.

It seems strange to describe a story set against a war as “lovely,” but that is the magic of this play. Rather than choke the audience to death with grim reality, Arms & The Man goes the roundabout way to make its points heard. A spoonful of sugar makes the political commentary go down, and Arms & The Man sneaks in its philosophy by charming the audience with its wit. It is comedy at its most British. Director Salvatore Brienik wisely gives the play a light touch. His direction is simple, clean, and clear; he lets the brilliance of the text shine through his actors and avoids the temptation to “director it up."

And the cast is so friggin’ charming, I want to give them all tea and hugs. Kacie and Alain Laforest are so endearing as the reluctant lovers, while Bundonis and Kinsherf provide funny, polished performances as the stuffy parents. Jones brings earthy gravitas to the role of Louka, and Hooper is effective as her savvy fellow servant. Even Wallace, as the horrid Sergius, brings much warmth and humanity to the role. It is an ensemble fitting for such strong material.

Costumes can often make or break a period production, but Becky Willett’s designs go above and beyond the call of duty. Her gowns are simply gorgeous. If you are into theatre simply for the production values, Arms & The Man gives you plenty of eye candy.

So: dresses, satire, Long Island City. It is an evening made to be enjoyed! Arms & The Man will delight you to pieces, and you may just learn something, too.

(Arms & The Man plays at The Secret Theatre, 4402 23rd Street, Long Island City, Queens, through October 13, 2013. Performances are Wednesdays through Saturdays at 8PM and Sundays at 3PM.  All tickets are $18. Tickets are available at armsandtheman.brownpapertickets.com.)