Anthem
Adapted and Directed by Jennifer Sandella
Off Off Broadway, Play 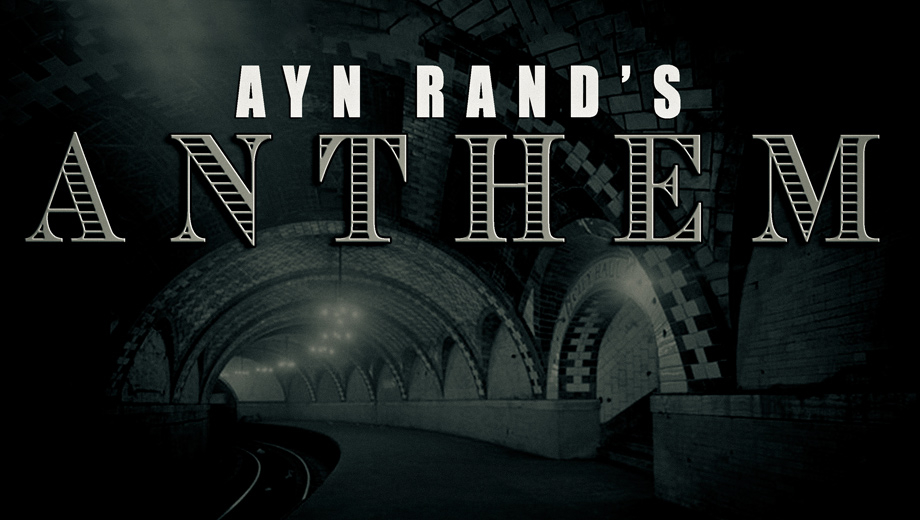 Was I somewhat skeptical upon being seated by an actor who said “Hello brother, right this way”? Yes. Was I a little cynical as the lights went down – and stayed down – for the first five minutes of the performance and I couldn’t take notes? Yes. Was I a tad stressed when I thought “Oh no, I’m not following the story of this actor’s opening monologue whatsoever.” Yes. Did this production grow on me? Did it find its way, structurally and tonally, pretty darn fast? Absolutely. While certainly not a simple or straightforward engagement, Anthem is challenging, stylized and charming in its own special way.

It is difficult to discuss the plot at hand because the play is more a representation of ideas and themes (the consequences of secrets, the mercilessness of broken law systems, the individual versus the group) than a linear story. Simply put-- although it doesn’t feel right to use the word simply while discussing this particular production-- Equality 7-2521 (Tom Carman) stumbles upon a new power (a light) in an abandoned underground (?) hole (?) and shares this news with The Council. They’re pissed: “What is not done collectively cannot be good.” 7-2521 then meets Liberty 5-3000 aka The Golden One and they seem to really, really like each other. There’s also talk of Unmentionable Times, nearby motes and ‘detentions’ which involve brutal thrashings. It's a lot to take in but I was surprised at how comfortable I became as I let it all wash over me. I didn’t always understand every rule of this world, but every artist involved undoubtedly did. That is precisely why this production is an enormous success.

There is so much to appreciate in the show’s brief 70-minute running time. The performances are all-around solid and there’s a true sense of the ensemble from start to finish. Tom Carman is particularly commanding. In such a verbose work he is a master storyteller, judiciously exploiting the power of his voice. Daniel Burns, Amanda Donelan, Laura King and Rachel Riendeau provide equally pointed, unswerving work.

Anthem is swiftly paced by director/adapter Jennifer Sandella, who enhances the evening with vivid stage pictures (the detention sequence, the council berating a man who spoke an unspeakable word) and a clever use of space. Sarah Abigail Hoke-Brady not only has one of the most fabulous names to discover in a program but her lighting design is inventive-- at times severe, other times remarkably subtle. And one of the most lucrative aspects is David Andreana’s sound composition and design. The music is thrilling and dangerous as 7-2521 maneuvers around the stage with a flashlight, then perfectly romantic when he meets 5-3000 in a forest, birds chirping and all.

So often actors are in their own worlds onstage, impressing individually but neglecting to connect as an ensemble. That is not the case with the cast of Anthem, where every performer inhabits the very same, very specific (albeit very bizarre – it’s Ayn Rand after all) world. And it’s a world I recommend you visit soon.

(Anthem plays at Dorothy Strelsin Theatre, 312 West 36th Street between 8th and 9th Avenues, through March 4th. Performances are Mondays and Wednesdays through Saturdays at 7:30PM, and Saturdays and Sundays at 3PM. Tickets are $25 and are available at brownpapertickets.com.)