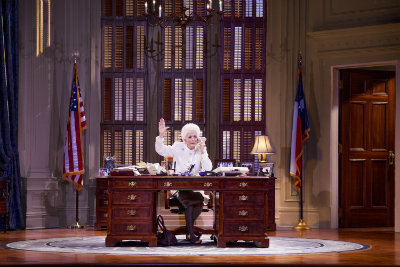 “I bet you guys remember me just for my hair.” Texas Governor Ann Richards’s legacy extends far beyond her admittedly famous hairdo. In the new solo play Ann, written by and starring Holland Taylor, this legacy is recounted with all the brass and humor of the lady herself.

Now playing at the Vivian Beaumont Theatre at Lincoln Center, Taylor’s one-woman homage to Richards has followed a journey similar to Richards’s, starting in Texas and blazing a trail to New York. Taylor, taken with the late Governor, began a four-year writing process leading to performances throughout Texas followed by Chicago and the Kennedy Center before finding its way, thankfully, to the New York stage.

In Ann, we find the Governor delivering a commencement address at an unnamed Texas university. Set after her turn has the leader of Texas, Richards recounts the story of her life and political career. From the small town of Lakeview, Texas (in which “there was no lake to view”), Richards rises as an unlikely public servant in Texas -- a divorced, recovering alcoholic, female Democrat.

Richards's history, which Taylor delivers in a light, conversational tone, journeys through her marriage and its deterioration, her alcoholism, and her gradual move to politics. Beginning simply with the need to make things better in her community, Richards’s political climb is a mix of civic duty, ambition, and luck. By the time she delivers her speech at the 1988 Democratic National Convention, Richards has enough buzz to take her to the capital in Austin.

Taylor’s work possesses a palpable love for the subject, and she refuses to let anyone leave the theatre until they’re as enamored with Richards as she is. And she succeeds. Taylor’s wit, both on the page and in delivery, transforms an enormous amount of history and politics into a fairly uproarious, deceptively light-hearted comedy. Though you might believe that some of the weightier issues of Richards’s career might not be given their due, Taylor demonstrates how Richards used humor to shine a knowing light on the absurdity and lack of common sense and compassion in politics.

Richards’s own Democratic beliefs carry a lot of weight in this play, though they’re not heavy-handed. After spending a part of her youth in San Diego, Richards speaks from her own experience about racial equality at a time when, in Texas, segregation was the norm. This sense of social justice carries into her career as she struggles with whether or not she should grant a stay to a soon-to-be-executed inmate or in her controversial decisions on gun control. Taylor’s deft hand not only provides a portrait of a singular presence in Texas politics, it illuminates our own political climate and the ever-growing call for progressive politicians like Richards. As Richards says, “Life is not fair, but government should be.”

Under Benjamin Endsley Klein’s direction, Taylor’s passion for the governor fuels the energy of the play. Taylor embodies Richards so fully that it’s easy to forget as you watch that she’s an actor and not the lady herself. Brash and unwavering, Taylor mixes a foul-mouthed Southern charm with a good-old-boy political savvy that makes you believe in the power of government for those who know how to play the game. “I placed my bets on me,” Richards says, and by the end of the play, you’ll be ready to do the same.

The text of the play is undeniably well-crafted; Taylor seamlessly mixes humor and history. However, in the structure of the play, she gets a bit lost. As a framing device, the commencement address is very effective in the beginning. As the narrative continues, however, the personal nature of the story seems out of place for a college graduation. The play then makes a somewhat-jarring switch (jump in time?  memory?) to a day in the life of the Governor’s office, to a short time in a New York office, to a fantasy of a speech, to post-death reflection, and back to the commencement. Though structural issues often come up in solo pieces, Ann works best when, for no constructed reason, Richards simply speaks her mind and heart to the audience.

Scenic designer Michael Fagin rounds out Richards’s life and career with an elegant and surprising set. Beginning with a nearly-bare stage, projected photographs and images bring Richards’s history to life. As the play continues the set transforms, most notably to the hard-wood richness of the governor’s office, and Richards's political presence beams in full, three-dimensional brilliance. Julie Weiss’s costumes, complimented by Paul Huntley’s wig design, complete the picture.

Fair, smart, and justice-oriented, Ann rouses the audience to applause and, perhaps, to action. As Richards says, “You haven’t lived until you’ve been Governor of Texas.” After seeing this play, I’m starting to believe it.

(Ann plays at the Vivian Beaumont Theatre at Lincoln Center, 150 West 65th Street through September 1, 2013. Performances are Tuesdays and Thursdays at 7PM; Wednesdays at 2PM and 8PM; Thursdays and Fridays at 8PM; and Saturdays at 2PM and 8PM; and Sundays at 3PM. Tickets are $75-$125 and are available at telecharge.com or by calling 212.239.6200. A limited number of $30 tickets will be available for every performance through LincTix, LCT's program for those age 21 to 35. For information, visit LincTix.org.)