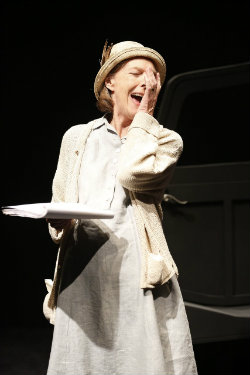 Eileen Atkins in Samuel Beckett's ALL THAT FALL. Photo by Carol Rosegg.

Samuel Beckett’s All That Fall has arrived at 59E59 Theaters after multiple critically acclaimed runs last year in London. Originally conceived as a radio play, Trevor Nunn’s production was staged to accommodate strict demands from the Beckett Estate requiring the stage production to resemble a performance for radio. The product is a simple yet nuanced staging of one of Beckett’s lesser known works, acted by a fine cast led by the remarkable Eileen Atkins and Michael Gambon.

The stage is carpeted and bare, with chairs lining the walls and old-fashioned microphones hanging from the ceiling. Cast members make their entrances and exits from the chairs, with the exception of Atkins whose real-time actions are the focal point of the play. As the elderly Maddy Rooney, Atkins slowly passes through her small Irish town as she makes her way to the train station to meet her blind husband, Dan (Gambon, well-known for playing Dumbledore in many of the Harry Potter movies). As she makes her journey, she crosses paths with neighbors who are also making their way around town before finally meeting Mr. Rooney who arrives at the platform late after a fateful trip.

As one might expect from a piece conceived for radio, All That Fall is dialogue-heavy with very little action. Mrs. and Mr. Rooney sluggishly hobble about the stage, and their banter is reflective of a couple with a lifetime of history and memories behind them. With little actions and few events to drive the plot along, Atkins’ exquisite performance is undoubtedly the most compelling aspect of the slightly dreary play. She is hilarious, heartbreaking, and astonishingly real as the elderly Mrs. Rooney, and she brings a captivating authenticity to the role. Gambon is similarly powerful, and the deep chemistry between the two stars makes the couples' age-old marriage feel totally believable.

Nunn’s direction is strong and creative — his radio adaptation is dynamic and interesting, using sound effects from the original broadcast to illustrate movement, action, and atmosphere while cast members act without props or sets while holding their scripts in their hands. Audience members are easily transported into the world of an old-fashioned radio play, and this concept is perfectly executed, bringing a freshness to an old script.

This production of All That Fall provides American audiences the opportunity to absorb this fine British production in an almost identical form to its successful West End run last Winter. A cast of British all-stars directed by one of the most esteemed British directors delivers Beckett’s radio play in tip-top shape, and Atkins’ and Gambon’s performances make for a special evening.