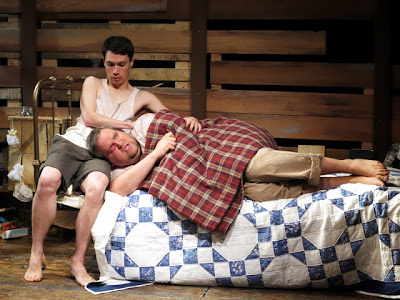 BOTTOM LINE: A parody of Southern melodramas expertly staged with an outstanding cast.

One long, hot summer, the Gettysburgs and the Juleps were besieged together in the Julep attic when a drought drove the local gator population into the swampy Louisiana town. Antietam Julep remembers those months of the gators, trapping the fey boy in his sweltering attic with his invalid mother, alcoholic father, and their close friends the Gettysburg family. EthelynnAnn and Bundle Gettysburg are less than happily married, although Bundle is too in love with his wife to see it and their daughter Antebellum has only one thought: her longing for Antietam. Meanwhile Antietam’s brother Toby still hasn’t returned from his errand. The longer these two families remain trapped between predatory reptiles below the floorboards and sweltering sun above the roof, the more the gator inside each emerges.

Alligator Summer draws from dark comedy, parody, melodrama, lyrical speeches, and the absurd. It most closely resembles a Martin McDonagh play set in Tennessee Williams’ scrap book. Through changes in style and tone, playwright Dylan Lamb’s language provides a throughline. Lamb’s words are in turn delicious and hilarious; he crafts an astute play with numerous moments of poignancy and hilarity.

I was completely impressed by the caliber of the performances, the production, and the script.

Alligator Summer is masterfully orchestrated by director Brandi Varnell who heads a cast that work flawlessly as an ensemble, and designers who collaborate to bring this Gator Menagerie world to life. Representational set pieces and detailed dressing flawlessly create not only a look but also a world and tone to house this very specific play, courtesy of Kathryn Lieber. The audience is immediately clued in to the culture of these characters before any body takes the stage. Then the show begins and Christopher D’Angelo’s lights cue us to what kind of play is being burlesqued, and Bethany Johnsrud’s costumes illuminate who and what these people are. Add to this the absurd dialogue and heightened accents, and the mood of the play reveals itself in the first moments of the production.

The cast are steam engines of verve, commitment, and histrionics powering from start to finish without hiccup. In both subdued and outrageous episodes, each actor maintains an authenticity without losing the heightened style. Jackie Krim burns and languishes as the conniving but powerless EthelynnAnn Gettysburg. Nicholas Yenson marries naiveté and candor in his rendition of Antietam, the keeper of the memory. Mark A. Keeton’s Atticus Julep is powerful but torn, as Attica Julep Annalisa Loeffler lends an ethereal wisdom to her character’s detachment, and Nathan Brisby effuses his Bundle Gettysburg with warmth and earnestness. Erin E. McGruff threatens to steal her scenes as the ebullient, outlandish tween Gettysburg girl Antebellum. And playwright Dylan Lamb gives a jarring, plush performance as Toby Julep.

For me, the biggest liabilities of this show are in how it is being marketed: as a dark, dark comedy, as outlandish, and as 75 minutes. These aren’t untrue, but they aren’t the full story. If the intention of the piece is to be a dark, dark, outrageous comedy, then it doesn’t push far enough. And perhaps the show is intended to be 75 minutes and the error lies in pacing, but this production ran 95–100 minutes the night I attended with no intermission, and the audience was noticeably taxed.

Alligator Summer provides a diverting evening in the theatre. It is a meticulously mounted production of a smart script with a dynamic and talented cast. Vacillating between dark comedy and drama, you’ll get a little laughter, a little lyrical, and a lot of homage to the Southern melodrama.