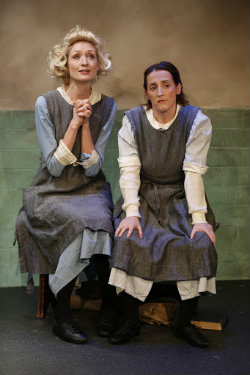 BOTTOM LINE: A non-linear account of the friendship formed when two women are forced to live in a hospital for the criminally insane after bearing illegitimate children.

It's the 1920s, and Dora (Aedín Moloney) and Persephone (Rachel Pickup) are complete strangers when they first meet. By the time they are released from their forced incarceration almost 50 years later they have gone through every level of friendship imaginable. Charlotte Jones’s Airswimming takes us on a journey through that friendship using vignettes scattered throughout the several decades the two women spend together.

After the first scene, primarily filled with exposition and character quirks, the lights fade to black and when they return Dora and Persephone seem like completely different people. It only takes a short time before we realize the reason for this drastic change is that the play has leaped through time. As the story unfolds, this non-linear device becomes one of the key elements of the play. It works especially well in situations such as when Dora says, “You have a lovely voice. Music to my ears..feel free to break into song at any time.” Minutes later we travel through time to a moment when Dora is desperate for Persephone to stop singing. The irony of that statement and others like it is well-captured by the actresses and helps to portray the inevitable conflicts that are bound to occur when being confined with one person for so long.

The general pace of the piece is slow, but the dialogue is filled with metaphor, occasionally blatant but often subtle and beautifully delivered. The play, as its title suggests, has a feeling of swimming about it. There are a few dream-esque sequences but overall Airswimming is grounded in reality, forcing the characters to use their imaginations to keep themselves occupied as they whittle away the years. A superb example of this occurs when the two imagine themselves at a fancy ball, the sexually ambiguous Dora portraying a soldier stunned at the sight of the beautiful Persephone. The scene is touching. The simplicity of the staging and power of the actors to transport the audience to the ball with them has a Shakespearean quality to it.

The chemistry between Moloney and Pickup is excellent. The two actresses connect on a deep level of understanding that is completely necessary in order to pull off a believable friendship developed for half a century. The play doesn’t dive into many details of the characters’s lives before their imprisonment, which worked well for me and helped to develop an empathy for the characters that otherwise might have come out of pity if too much time was spent on the injustice of their incarceration. And because of the empathy that develops I felt even more outrage and sadness at the thought that this whole play is based on a true story. The women are referred to as “moral imbeciles” and put away, forgotten by friends, family, and country -- leaving them with only one person to turn to, each other. The tragedy of their lives juxtaposed with the hope each character finds at times throughout the play to help encourage the other makes for a powerful show about friendship.

(Airswimming plays at the Irish Repertory Theatre, W. Scott McLucas Studio Theatre, 132 West 22nd Street, between 6th and 7th Avenues, through February 3, 2013. Performances are Wednesdays at 3PM and 8PM; Thursdays at 7PM; Fridays at 8PM; Saturdays at 3PM and 8PM and Sundays at 3PM. Tickets are $45 and are available by calling 212-727-2737 or online at www.irishrep.org.)