Conceived by Jack Viertel; Directed and Choreographed by Warren Carlyle 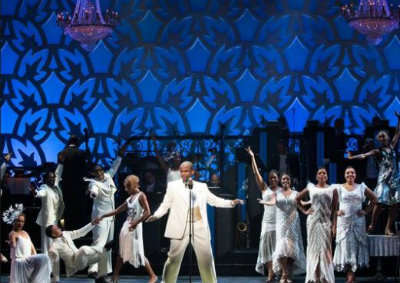 Dule Hill and the cast of AFTER MIDNIGHT.

BOTTOM LINE: The Jazz at Lincoln Center All-Stars are joined by a stellar cast of singers and dancers in this exciting new musical revue.

After Midnight is really good, and not only that, it knows it. Revues are generally not my favorite type of musical theatre offering- without a book and the emotional thrust that comes with a plot I find it hard to get invested. Sure, that's a great love song and she sounds amazing, but to whom is she singing? However, unlike something like Sondheim on Sondheim or Jerry's Girls, After Midnight knows what it is and it is doing it well.

With songs by everyone from Dorothy Fields and Jimmy McHugh, to Ted Koehler and Harold Arlen, with most of the arrangements by Duke Ellington, After Midnight aims to take us back to Harlem's Cotton Club during prohibition when an all-black cast of musicians and entertainers would play to a whites-only audience. After Midnight is consistent in style and tone, moves at a break-neck pace, clocks in at a tight ninety minutes, and has one of the best curtain calls I have ever seen, "Freeze and Melt", that I am going to steal and break-out at my family Christmas ("Grandma, I need you to freeze, now melt"). Watching the cast and musicians of After Midnight is like watching Olympic athletes- there is a confidence and arrogance that comes from simply knowing without a moment's hesitation that whatever it is you do, you are exceptionally good at.

Directed and choreographed by Warren Carlyle, the dancing is exciting and feels at the same time modern and old-fashioned. The show is aided greatly by the presence of the Jazz at Lincoln Center All Stars conducted by Daryl Waters, who sound amazing. The costumes by Isabel Toledo are aboslutely stunning, perfectly period without being too obscure, and make every performer look like a million bucks. Otherwise, most of the design is somewhat lackluster. The band sits on a completely gratuitous moving grandstand that slides towards us as though it were the helicopter in Miss Saigon, even if this device has failed to impress a single audience member since 1960. The proscenium lights up, because of course it does, and the rest of the sparse sets by John Lee Beatty and lighting design by Howell Binkley are similarly perfunctory. The sound design by Peter Hylenski is worth mentioning only because the band is too loud and the singers are not loud enough, which has seemingly happened in every musical revue featuring an on-stage band since time immemorial, so you'd think the problem would have been solved by now.

But let's be honest, this show is really about the performers, and man oh man do they deliver. The dancers dance as though they were dancing their last dance on earth, the singers wail without a hint of eight-show a week strain, and the entire cast hits both the comedic and dramatic beats with precision and specificity. The current guest star Fantasia Barrino of American Idol fame has without question one of the most crystal clear vocal instruments around and takes it to thrilling heights in numbers like "I Can't Give You Anything But Love" and "Stormy Weather." Adriane Lenox is a stand-out as the comic relief singer of the evening, coming across as both intoxicated and classy (a look I've been trying to perfect since amy undergrad days) singing "Women Be Wise" and "Go Back Where You Stayed Last Night." Featured dancer Karine Plantadit is given some lengthy stage time and has an exotic presence that is hard to look away from. Every member of the cast seems designed for this evening and is exceptionally thrilled to be there.

So yeah, I prefer a story with my musical theatre music, characters I can empathize with, jokes that relate to the action, and tears that take the two hours to finally fall. But if I have to choose a favorite revue if might just be After Midnight. It swaggers onstage, throws everything it has at you, and leaves knowing that it left its mark.