Your Boyfriend May Be Imaginary 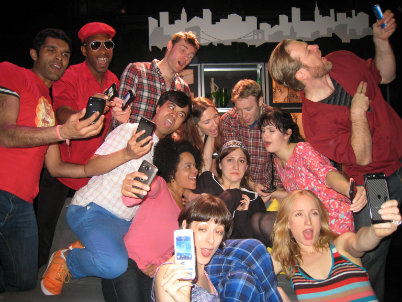 Cast of YOUR BOYFRIEND MAY BE IMAGINARY. Photo by Meg Sturiano

BOTTOM LINE: A talented cast and director evoke plenty of laughter from a clever script, despite an eventual loss of momentum.

The constant pulse of New York City’s night life and social events make it a dream for over-ambitious socialites, but can make it draining for those less secure in their social skills. This is shown through the anti-social Marci (Dana Fowler) who begins the play at a party somewhere in Manhattan, and seems to know an awful lot of narcissistic people for being a wallflower. She emerges in pajamas and a hoodie from beneath a pile of constant cell phone photo snapping partygoers. True to life, these ultra self absorbed, overly wired-in 20 and 30-something New Yorkers spend the party constantly photographing each other, texting others, and talking only of themselves, proving to never be fully engaged in the moment, and more concerned with documenting it. “I’m not really here,” Marci whispers as she attempts to disappear into the couch. Finally, when she is confronted by the diva-ish hostess Cassandra (played by the sometimes scene-stealing Risa Sarachan) who didn’t invite her to begin with, Marci confesses that she only came to track down her mysteriously missing boyfriend, Phil. Cassandra (who shows off her narcissim by smiling and posing for the audience) and snotty Beth (Kirsten Hopkins) question the existence of Marci’s boyfriend as Marci has apparently never had one. Marci, however, reveals an elaborate scenario in which her supposed boyfriend doesn’t have a cell phone, or a permanent address and lives as an off-the-grid activist and aging trustafarian. While Marci’s explanations manage to cover every possible question of doubt, her friends still disbelieve Phil’s existence. Denise (Maya Lawson), who seems to be the only true ally Marci has, tries to lie for her, inventing an encounter with the questionable Phil. Marci explains that she has to track down Todd Whatshisname (portrayed with immense comedic skill by Debargo Sanyal) in order to track down Jen Bend, who supposedly dated Phil during college and might know his whereabouts now.

Marci rushes to Todd’s party in Chelsea in hope of finding her information. The wonderfully mean-spirited and flamboyant Todd adds some needed spice and comedic relief to the play as an over the top drunken narcissist, especially since Marci speaks in a hushed, sometimes mumbled voice. His over the top extroversion makes up for Marci’s exaggerated introversion.

Marci then rushes out to a yuppie divorce party in Carroll Gardens, where everyone wears khakis and discusses time shares in The Hamptons. There she runs into the also deeply narcissistic “Hunky Dave” (Quinlan Corbett) who she spots making out with a girl on a pile of the party guests’ coats. When the girl flees the room, Hunky Dave sexually propositions Marci, aided by a rumor that Marci is obsessed with him. In the play’s most compelling scene, Marci turns the table on Dave, making him feel objectified and taken advantage of, compelling him for once to see things from the perspective of the women he foists himself upon.

The cast of Your Boyfriend May Be Imaginary is spot-on in their roles, as is Meg Sturiano’s direction. The script, however, despite being immensely humorous at times, never reaches the apex its plotline promises. During the final fifteen minutes the play loses momentum though its final scene hints at a deeper rumination on the meaning of human connections. The script, nonetheless, has plenty of inspired moments, and its parodies of narcissistic, gossipy New Yorkers are frighteningly accurate. In the end the existence of Marci’s boyfriend isn’t important, what matters is the fact that it served as an impetus to push Marci out into the real world.

(Your Boyfriend May Be Imaginary plays at Under St. Marks, 94 St. Marks Place between 1st Avenue and Avenue A, through April 28, 2012. Performances are Thursdays at 8PM; Fridays at 8PM; and Saturdays at 8PM. Tickets are $18, $15 for students/seniors, and are available online at www.horseTRADE.info or by calling Smarttix at 212.868.4444.)