You Better Sit Down: Tales From My Parents' Divorce

Off Off Broadway, New Play
Runs through 5.6.12
The Flea Theater, 41 White Street 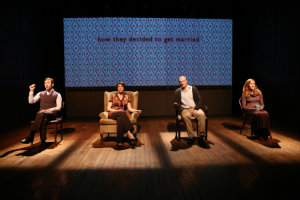 The cast of YOU BETTER SIT DOWN: TALES FROM MY PARENTS' DIVORCE. Photo by Joan Marcus.

BOTTOM LINE: An enjoyable hour’s worth of amusement that falls short of delivering a deeper takeaway.

Usually, parental-impersonations are kindly reserved for exclusive family gatherings protected by forgiving familial surroundings. This is especially the case when such enactments are attempting to expose characteristic idiosyncrasies and other such delicate matters. Without the protection of that domestic safety net, however, You Better Sit Down: Tales From My Parents’ Divorce, The Civilians latest documentary-style production now playing at The Flea, exposes the realities of four actor’s parents’ bumpy matrimonial histories, played by their very own darling progeny.

Four varieties of comfortable chairs, enclosed in rectangles of light, create the four separate households represented, each housing one actor, the tangible result of the failed connubial chronicle that unfolds. In classic Civilians style, the material that makes up the 65-minute series of strung-together monologues has been culled from personal interviews between actors and their parents. Each actor channels their mother for the duration (with the exception of Matthew Maher, who portrays both his mother and father), detailing the lead-up, years-of, and eventual disintegration of their respective marriages. Hostility inevitably creeps in, to varying degrees, through all the monologues, as do pathos and humor, and, very occasionally, humility. These people have all gone on with their lives for many years since the incidents cataloged in the production, and they do so during their interviews as well, each answering phone calls, doorbells, and cat mischiefs all the while, as if to underscore their “real world reality,” as if their children’s presence on the stage was not enough.

The show serves to be a veritable platform to finally ask those questions that divorced children seldom remember to ask because they’re too busy trying to remember to bring next week’s homework to next week’s parent’s house. Questions like: How did you meet?  How was the marriage? Was there anything precious left between you?  These questions finally get a little time to breathe, though the question remains whether they needed to be aired in the first place. If the marriage is no example to follow, are we studying it to be sure we don’t end up on the same track? Is this research to make the opposite choices? Are any of the answers really that simple?

But these children who patiently sit telling their parents’ tales render a mere footnote in the evening. Mentioned by each parent briefly under the projected heading, “Now They’re Married,” they mutely give voice to those who birthed them without letting on what they’ve taken from these so-common examples of ill-fated marriages. The production opens the door to exposing some of the more nuanced details of this now all-too familiar storyline. But the logical next step never materializes: to find out how their own children have fared, as they are, after all, sitting just before us, and the question as to whether there is still yet a happy ending (if there can be), is left wanting.

Ultimately, despite the production keeping a more personal but impactful element at bay, the actors tell their parents' stories with grace and precision. They each imbue the parents they play with love and care, subtly exposing sweet-odd character traits, such as Matthew Maher’s father’s amazing bursts of laughter, and Jennifer R. Morris’s mother’s wide-eyed thinking, with all the tenderness they deserve. They are all a joy to watch, and that’s something their parents can surely be proud of.

(You Better Sit Down: Tales From My Parents' Divorce plays at The Flea Theater, 41 White Street between Church and Broadway, through May 6, 2012. Performances are Tuesdays at 7PM; Wednesdays at 7PM; Thursdays at 7PM; Fridays at 7PM; Saturdays at 3PM and Sundays at 3PM. Tickets are $35 -- except Tuesdays at pay-what-you-can -- and are available at theflea.org or by calling 212.352.3101.)