We Love You, But No!

Off Off Broadway, Solo Show
Runs through 9.17.12
The Kraine Theater, 85 East 4th Street 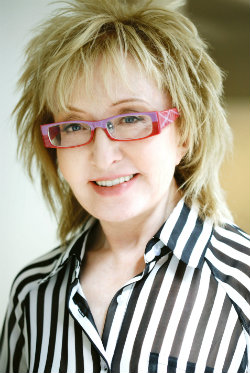 One of my first jobs out of college was working in a fundraising call center. In the office was a woman of about 50 years old who was convinced she was going to make it onto American Idol. She sang pop songs in empty offices during her break and would frequently plug her karaoke shows. She was determined to be the first older contestant on American Idol and would sing for anyone who would listen to prove it. Unfortunately, her talent level wasn’t up to her determination -- but in her mind it was always her age that was the reasoning behind rejection and never her talent. We Love You, But No!, a new comedic monologue play written and performed by June Daniel White, plays out the fantasy that my ill-advised co-worker dreamed of -- from soul-sucking day job to superstar halfway through life. The issue in White's script however is that daydreams don't always make for the best drama.

White plays Mamie, a middle-aged actress/waitress at a diner in Tallahassee. She has worked at the diner so long she has forgotten just how many years it has been. For her, Hollywood is life, and everything that happens outside of the movies is irrelevant. She constantly quotes movies, always crediting the year, production company and the director (one of the funnier recurring bits of the show). After she learns that her childhood movie palace is closing, Mamie decides to head out west to Hollywood to make her break in showbiz -- despite many failed attempts in the past. This time she stays the course on the Greyhound bus. Upon arriving in Hollywood she lands herself an agent and expects to be cast after her first audition. The words, "We love you, but no," are unfathomable to Mamie. She cannot see why, if they love her, they just won't cast her. Finally she gets herself a small bit part which leads to nothing but living out of her car after losing her apartment in a crackhouse. Through extraordinary (and not in anyway believable) circumstances she ends up getting Brad Pitt's attention and an Oscar nomination. Mamie gives it all up though, and heads back to Tallahasee, until she receives an unexpected script in the mail changing her life forever.

White makes a referece to Susan Boyle in her script, which is essentially an inspiration story to anyone "past their prime" who still dreams of stardom. However, the difference is that Boyle was discovered for having a gift that very few people possess. This is not the same as simply a strong desire to be in movies -- which is mostly what Mamie has in White's script. Nevertheless, a lesson exists somewhere in this muddled monologue play about never being too old to change your life to do whatever makes you happy. However, there is a fine line between happiness and delusion, on which Mamie teeters.

Although some light direction by legendary stage director Austin Pendleton helps with clarity of time and place, White's relationships become jumbled as they all take place via one-way cell phone converations. At times White seems to be mixing some key information up in her story and the circumstances become confusing. Some cuts and tightening up of facts in this fledgling monologue play could lead to charming fast paced and funny entertainment. Currently it plays more like a stand-up comedian trying out new jokes on a patient audience. A few less zingers may prove to help White's play and alleviate those moments that fall flat, as well as add some heart to this misguided character.