Written and performed by David Lawson 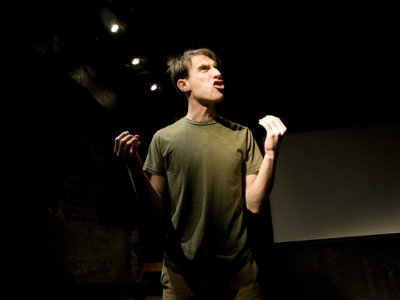 BOTTOM LINE: Lawson’s skill as both a comedian and a storyteller makes his tales of searching for sexually arousing material in both a pre- and post- internet era hilarious and relatable.

As a teen and preteen living without a home internet connection, Lawson has to depend on pilfering his mother’s Victoria’s Secret catalogs and later shoplifting videos like “Nude Yoga” with his friends from his learning disablity classes. Lawson also takes to the family’s VCR and cable box, creating tapes of the most sexually arousing music videos MTV has to offer, sitting all day in front of the TV screen just to record certain gems from The Spice Girls and Fiona Apple. Soon, Lawson and his friends begin bashing the family cable box in the hopes of being able to watch the scrambled porn on Skinemax.

Lawson delivers his stories with comic skill, and his comfortable demeanor evokes a close friend retelling embarrassing childhood secrets over a round of beers. While his stories are by no means unique, Lawson’s skill for storytelling enables him to illicit laughter from each event in his quest to explore his sexuality via media and technology. Part of the play’s endearingness derives from the fact that Lawson paints himself as a curious, fumbling boy, making his hunger for sexual material seem sweet and normalized.

VCR Love is more laugh-inducing than many of the bigger budget shows now playing. The fact that Lawson could illicit so much audience laughter and attention during the performance I attended, despite having no props or visual aids is a testament to his gift as a performer. Those of us who came of age during the dawn of the internet will find his material highly relatable. When it returns next month to The Dixon Place theater it will be a mere $5 well spent.

Written and directed by David Lawson