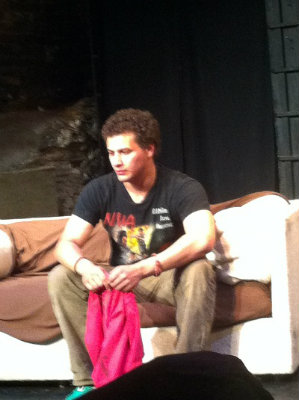 Alejandro Hernandez in THE VIRILOGY. Photo by Joseph Drechsel.

The fact that things are funnier when you’re inebriated is the idea behind the drinking game gimmick of Strange Dog Theater’s original production, The Virilogy. The play incorporates a cute drinking game premise in which audience members are encouraged to drink every time a character of their choosing does. (The price of your ticket includes a beer to help you get started.) However, lightweights need not worry, the trio at the heart of the play actually drink so rarely that you’d need to be drinking the hard stuff to get sufficiently tipsy.

The play centers on three twenty-something men, and each of the play’s three parts focuses on one of the characters facing a break up with their significant other. Each act is precluded by the actors performing a humorous and well-executed rendition of a romance oriented pop song known for being sung by a female performer, with lyrics which in some way reflect the themes of the act. In the first act, Quinn (Alejandro Hernandez) is trying to recover from being dumped by his long term girlfriend Michelle. Quinn is attempting to cope with his unexpected heartbreak by donning Michelle’s pink hoodie and flowery perfume while writing emotionally cathartic poetry. Well meaning Brian (Scott Cagney) attempts to help Quinn through his difficult time by providing him with beer and trying to get him out of his girlfriend’s clothing. However self-absorbed Stu (David Murgittroyd) has his sights set on having sex with Quinn’s ex-girlfriend as soon as he can get him out of his apartment.

The second act, which is by far the funniest of the three, focuses on the boys celebrating Brian finally breaking up with his evil girlfriend, Lindsay, whose very existence was agony for Quinn and Stu. “When Satan dies, he’s going to an underworld run by her,” says Stu. The two reveal to Brian their primary methods of coping with the agony that Lindsay brings to their lives, which consist of a large display board outlining her top ten most terrible traits and the ways she makes Brian miserable, as well as a cantaloupe head which they painted to resemble her and then stab with a screwdriver.

The play takes a step back from the humor in the third act, as it explores the drama of a failed relationship and shows the characters attempting to behave like men rather than boys. Although the jokes do eventually return, they mostly consist of funny references to the previous acts. This adds depth to the characters and to the material, but causes the script to lose its strong and consistent comedic momentum.

The subject matter explored in this work isn’t anything unusual or surprising, nor are the characters and plot different from what any New York theatergoer will have seen in other productions. Nonetheless, the production succeeds in part because it's immensely funny. The script’s humor is more clever and streamlined than what I’ve encountered in the many other plays I’ve seen about dating woes. During the performance I attended, the entire audience was in stitches, falling over their seats with laughter (of course, the beer may have certainly helped). Ben Clawson’s clever dialogue is well executed by director Artem Yatunov, as well as the talented cast who know how to milk every possible laugh from every quip, and time each joke perfectly. The actors, and Alejandro Hernandez in particular, show a talent for physical comedy, turning even a rendition of a Spice Girls song into comic gold.

The drinking game gimmick seems unnecessary for a play already quite funny (although it’s an appealing tie-in, especially considering this work was previously performed in a bar.) The bar-laden East Village location of Under St. Marks makes an outing to this play a good precursor to a night spent out drinking. In addition, for those feeling down about life in general, there’s nothing like spending an hour and a half laughing consistently and drinking beer to improve one’s world view. If nothing else, The Virilogy is sure to lift your spirits.