Through the Yellow Hour 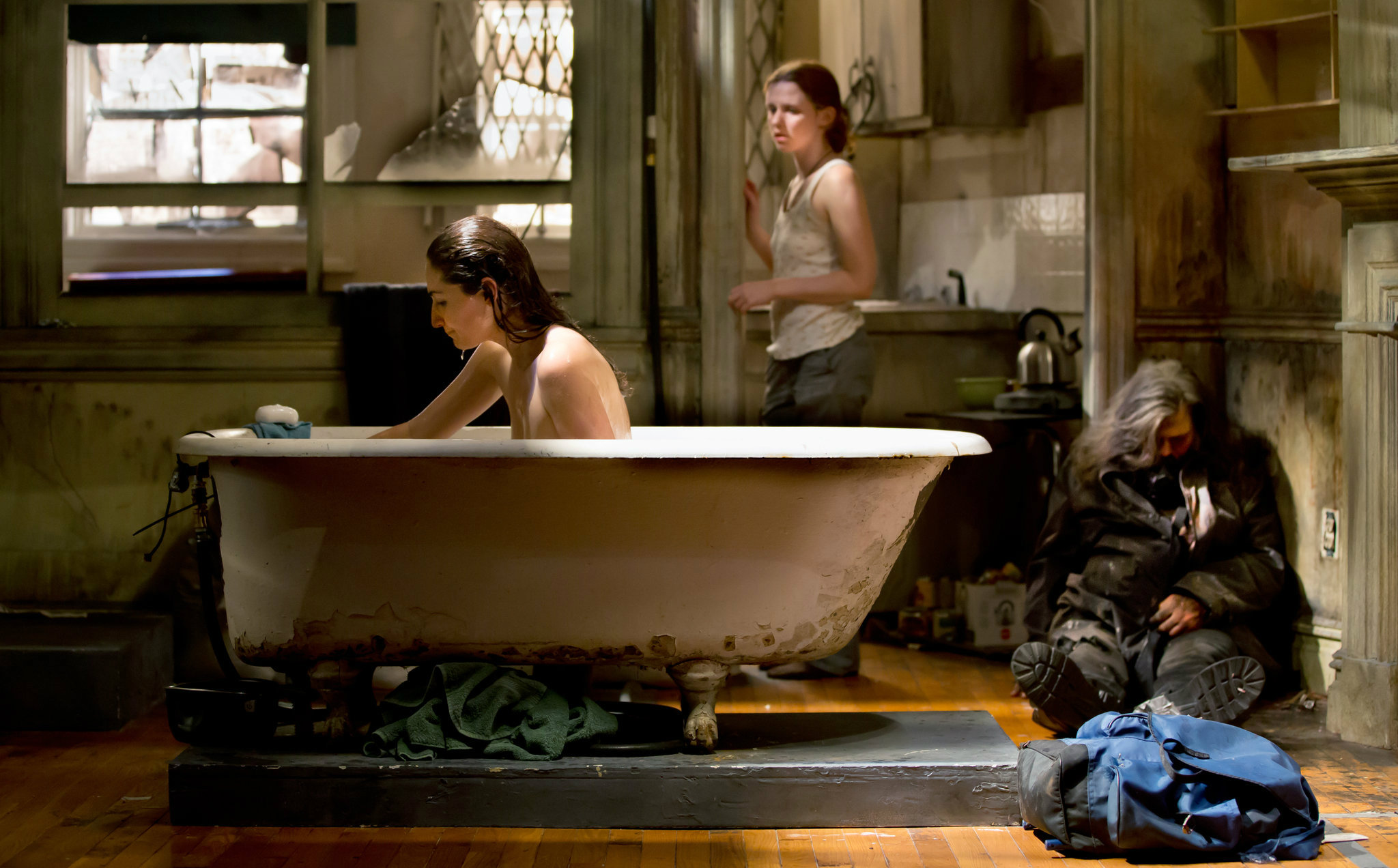 Danielle Slavick, Hani Furstenberg, and Brian Mendes in THROUGH THE YELLOW HOUR.

BOTTOM LINE: A gripping new drama of a post-apocalyptic America, told through the haunting writing and direction of Adam Rapp.

To enter the Rattlestick Playwrights Theater is to leave behind 2012 and the more-or-less comfortable lifestyle we are afforded today. Ushers have been replaced by researchers whose mouths and noses are covered by protective masks and their bodies by sterile blue scrubs. In lieu of playbills, one is issued a newspaper bearing an image of the Manhattan skyline draped with ominous black clouds. The sounds of guns firing, bombs exploding, and helicopters flying pierce the ears, and everyone is stamped with a blue oval on the neck so as to be “accounted for.” It is not a theatre on Waverly Place we have entered, but a post-apocalyptic wasteland. And all this before one has taken his or her seat.

Atmosphere is a major part of the theatrical experience Adam Rapp is creating with his new play Through the Yellow Hour. The stairs, lobby, and theatre appear to be in ruins -- covered in black tarps and spray paint, hanging wooden beams, and strewn-about light bulbs. Rapp transports the audience into his grim future from the moment we enter his theatre and holds us there transfixed for the rest of the evening.

America was attacked. All of the major cities invaded and destroyed through germ warfare. Plague infects and kills most of the population; any men found thereafter are captured, tortured, and castrated. The play begins with a woman passed out by the tub of her destroyed apartment. A disheveled looking man breaks through the window, speaks a few lines of Arabic, reaches for a crowbar, and without hesitation the woman shoots him dead. If the theatre’s ambiance is not an indicator of the high-stakes world of the play then the first thirty seconds removes all doubt. The shooter, Ellen (Hani Furstenberg) receives a delivery when another survivor, Maude (Danielle Slavick), knocks on her door. The delivery is Maude’s healthy baby girl, which she readily trades for two nights of safety, shelter, and pain killers. The baby appears to be a form of currency with the potential to mysteriously improve Ellen’s life and unbind Maude from parental responsibility so she can flee from the remains of the crumbling country. The following ninety minutes are fraught with tension and suspense as the two women and another victim, Hakim (Alok Tewari), negotiate their survival holed up in this shell of an apartment.

The play treads into the realm of the sci-fi genre in the final scenes, when two people clad entirely in white garments arrive to inspect and take the baby girl to their “ideal” community -- a place where healthy white girls and boys go to live and be educated, and people of color perform manual labor. Little more is said about this mysterious place, but it is presumably one of the fading rays of hope for a future society. Decide for yourself what you find more grim.

Through the Yellow Hour is a gripping evening of theatre from the moment one enters the building all the way through the curtain call. It may even linger well beyond the subway ride home depending on your sensibility. Mr. Rapp’s commitment to storytelling and theatricality is bold and memorable. The post-apocalyptic/sci-ii genre may be a particular taste, but Rapp forces the audience to engage with the world he’s created and ponder the nightmare appearing on stage. However, moments of awkwardness arise when it is made clear that the USA’s attackers are Muslim. Perhaps it is just a politically-correct-knee-jerk-reaction, but fostering additional (albeit imaginary) fear of the Muslim world feels crass. Individual fears aside, this moment ultimately pulls you out of the world that Rapp has so painstakingly created to think: “wait a minute...did they really just say that?”

The hardened Ellen is the moral center of the play, and Furstenberg is convincing as someone who has the will and gumption to push through these dire circumstances. The cut-throat desperation of Furstenberg is matched by the castmates who play her fellow survivors, whether they are unaffected and callous like Danielle Slavick's Maude who is willing to trade her baby’s safety for her own, or the earnest and wilting Alok Tewari as Hakim, the brutalized torture victim. These scrappy rebels clash appropriately with the performances of Joanne Tucker and Matt Pilieci (the white-wearing folks who take the baby) as they create characters who are as clipped, measured, and icy as their tight outfits imply.

The technical element is a significant contribution to this work, and must be accounted for. The bleak and deteriorating set and similarly decorated theatre (by Andromache Chalfant) create the disheveled and chaotic environment. While the minimal lighting (by Keith Parham) is uncomfortably naturalistic and builds up the terror inherent in this piece. The actors meander around the dingy apartment in shadow, sometimes illuminating the space with a single flashlight or lantern. Even the blackouts between scenes are overpowering in their darkness, and chill as they leave the audience listening to the firing bullets and wailing sirens in Christian Frederickson’s soundscape.

In Through the Yellow Hour, Adam Rapp not only asserts himself as a writer with a creative imagination, but also as a director with a haunting and unapologetic vision. The production as a whole bombards the audience, and does not allow us to look away. Although some may close their eyes or plug their ears to retreat from the horror, chances are one eye is slightly open and one ear is listening intently. As the audience, we are willing prisoners in Rapp’s world, and although we may wake the next morning to find that blue oval on our neck staring back from our bathroom mirrors, we have the comfort of knowing this chilling experience was just a play...

(Through the Yellow Hour plays at the Rattlestick Playwrights Theater, 224 Waverly Place, through November 10, 2012. Performaces are Sundays and Mondays at 7:30PM; Wednesdays at 7:30PM; Thursdays and Fridays at 8PM; Saturdays at 2PM and 8PM. Tickets at $55, $15 for under-30, and $10 for students. Tickets can be purchased by calling 866-811-4111 or online at www.wegothere.org/buy-tickets/. For more show info visit wegothere.org.)