Off Off Broadway, Play
Runs through 7.1.12
The Flea Theater, 41 White Street 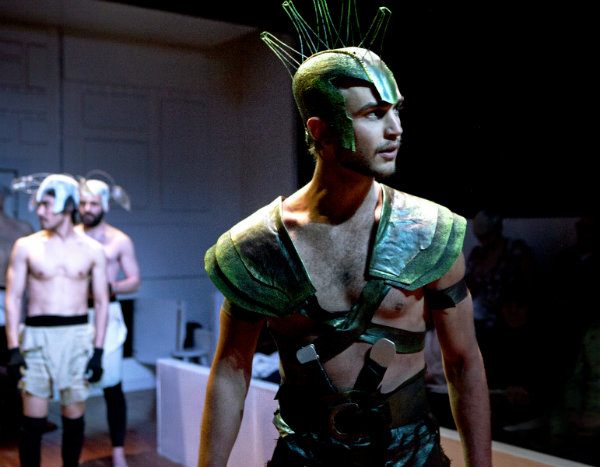 Grant Harrison as Ajax among the sheep in THESE SEVEN SICKNESSES. Photo by Laura June Kirsch.

BOTTOM LINE: These Seven Sicknesses is a stunning return of a Drama Desk-nominated production based on Sophocles's plays.

These Seven Sicknesses was originally conceived in the director’s living room where it was presented as part of Exit, Pursued by a Bear’s Lab 2. The project was then further developed and fully staged at the Flea in January 2012, where its sold-out run lasted through two extensions. This decided success spawned the current remounting, which one cast member before the show described as “more of a revamping.”

Written by Sean Graney and directing by Ed Sylvanus Iskandar (also the Artistic Director of Exit, Pursued by a Bear), These Seven Sicknesses runs for twenty three performances this time around. The show features mainly the same cast as the original mounting with a few actors shifted into different roles and a handful of new actors filling the ranks. All of the actors are pulled from The Bats, the Flea’s resident company of emerging, non-Equity actors.

For this iteration, the director sought to not only revive the January production, but to push it a step further. One actor explained to me how the project is still evolving through performance. For example, the blood stains on the set are multiplying through the run; stage management has been instructed not to worry about wiping splatter away. Also the fight choreography for Ajax’s slaughter of the sleep continues to develop and become more intricate.

These Seven Sicknesses strings together the narratives of the seven surviving plays by Sophocles to create an arching story and to demonstrate themes of honor, violence, and the sicknesses that plague mankind. It is a finely-drawn and moving script divided into three acts: “Honor Lost,” “Honor Found,” and “Honor Abandoned” and following the sagas that surround the heroes Oedipus, Agamemnon, Herakles and the family and loved friends in their wake.

Though the show runs a staggering 4.5 hours, the pacing is quick and the evening is broken up by a catered dinner (vegan and gluten-free) and then by a dessert (not vegan, not gluten-free), both served by the cast. In fact, the actors engage with the audience from the beginning, through preshow, through the breaks, and then in the lobby after the show, creating a jovial, communal atmosphere in the space. It is a special performer who can in turn bring life to a challenging classic role and also warmly host a mass of strangers.

This is not surprising, however, considering the extraordinary caliber of this cast. The Bats is a highly selective, audition-only acting company, which yields the reward of this impervious ensemble of well-trained, sincere, exemplary actors. These performers effortlessly shift from moments of devastation to delight, from excoriating speeches to contemporary quips. The audience is guided between parts by a chorus of hospital nurses accompanied by an orderly (Kelechi Ezie, Lisa Wipperling, Emily Brown, Bonnie Milligan, Lauren Hayes, Whitney Conkling, and Will Turner). This amiable bunch comments, jokes, and assists with transitions. They also sing numbers — generally contemporary — in place of the traditional Greek Parados or Exodos which would have accompanied Sophocles's performances 2000+ years ago.

In fact, this phenomenal cast of actors, who soar on stage and then serve the audience dinner with a side of fun, good humor, and goodwill, are each interesting performers, attractive persons, and promising talents. As Philoktetes, Seth Moore turns in a titan performance full of humor and desperation, and tour de force physicality in his title section where he operates like an acrobat on his crutch. Antigone is tackled by the emotionally masterful Katherine Folk-Sullivan, mesmerizing whether breaking down or just broken-hearted. Eloise Eonnet (Jocasta) is both stunning and sympathetic while Jeff Ronan brings magnetism and majesty to Oedipus. Kate Michaud (Dejanira) is a vocal master, painting her performance with tone and pitch. As the Blind Seer, Holly Chou plays with vigor and venom and is the perfect balance of contemporized classical — she could as easily be a skin head as a holy man. Miles Jacoby (Hyllus) blends sincerity with a perfect understanding of the functions of his role’s comic relief. Yoni Ben-Yehuda (Polyneices) charms the audience (though not his family). Grant Harrison proves a virile and volcanic Ajax. The frequently recurring characters Carrier (Tommy Crawford) and Creon (Stephen Stout) enrich the script with both consistency and a charming touch of modern tone.

Director Iskandar heads a deeply artistic design team. The action plays on a nuanced and engrossing set by Julia Noulin-Merat under dramatic, complex, and often beautiful lights by Andrew Hungerford, based on an original design by Carl Wiemann. The costumes are a spectacular marriage of current and ancient, conceptual and literal, played out through Loren Shaw’s sophisticated color palate. These are complimented by Tiffany Abercrombie’s magnificent make-up, whether Philoktetes smattering of scar tissue or the Pollock-eque streaking of dirt and blood on the dying Oedipus. Fight director Michael Wieser’s work reaches its peak with Ajax, when violence transcends to the richness of dance—also a pinnacle for the chilling, evocative soundtrack by Patrick Metzger.

With the help of these designers and a lovely script, Iskandar stages a beautiful play with stunning visual moments. One of these striking scenes occurs when Elektra recreates her father’s murder culminating in a spray of apples across the stage. The first two parts share parallel styled endings in regards to the treatment of the suicide wife and the husband’s second mate. And I was deeply affected by Iskandar’s use of the chorus of nurses in the suspenseful moment when Antigone must decide if she will touch the body of Polyneices and seal her fate. I did wonder about a certain moment in Act 3: the comic aspects of the mail slit in “Antigone,” the gratuitous blood in “Elektra,” and the neutered version of “Wayfaring Stranger” — did the artistry and finesse that make These Seven Sins so spectacular peak in Act 2? But at the end, the entire cast returns and forms a stunning stage picture, reaffirming the brilliance of the director and his design team.

The Seven Sicknesses is genuinely theatrical, artistic, and makes strong use of the source material. It is a must see for theatre fans, particularly those interested in the Greeks.

(These Seven Sicknesses plays at The Flea Theater, 41 White Street between Church and Broadway, through June 1, 2012. Performances are Tuesdays through Saturdays at 6:30PM and Sundays at 4:30PM. Tickets are $50-$60, including dinner and dessert, and are available by calling 212-352-3101  or online at www.theflea.org.)