By Begonya Plaza; Directed by Will Pomerantz 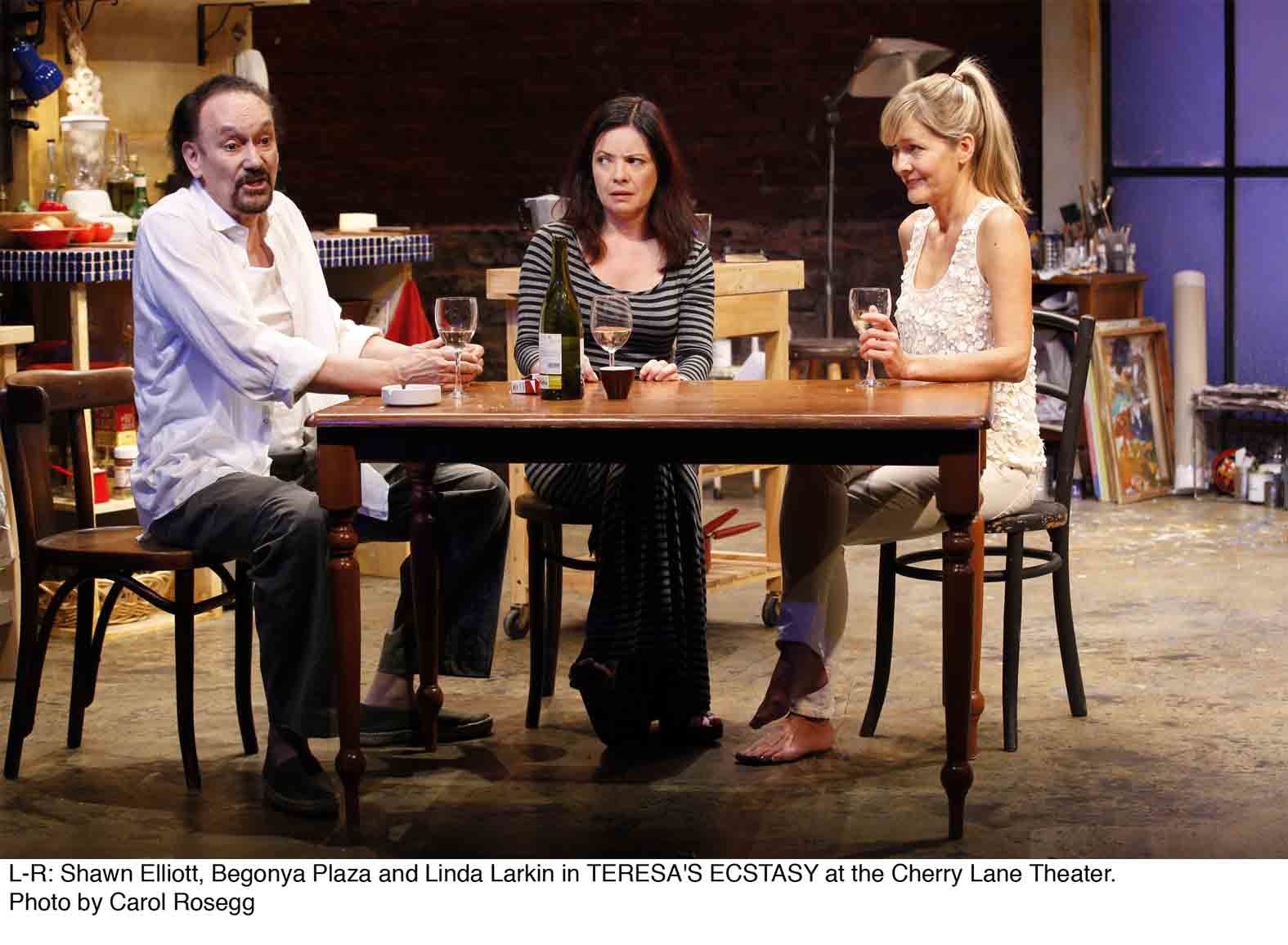 BOTTOM LINE: A 16th-century nun, a macho Spanish artist, his ex-wife, and a high-powered New York executive co-exist together about as well as one would expect in this problematic new play.

Saint Teresa of Avila is a 16th-century nun famed for her writings, mysticism, and more notoriously for her “ecstasies” that were induced by the Lord. Fast forward five centuries to the Cherry Lane Theatre, where the current production of Teresa’s Ecstasy strives to achieve that sense of mysticism, but fails to produce enough real ecstasy for the viewer.

Begonya Plaza writes and stars in the play about a writer, Carlotta, who travels to Spain with her editor Becky (Linda Larkin), to research Saint Teresa for a magazine piece. The play is set in the apartment of Andres (Shawn Elliott), Carlotta’s soon-to-be divorced Spanish husband, whose abode the two women pass through on their visit to Teresa’s church in Avila. Although the play is captivating at points, the piece feels disconnected, as though it is a combination of many plays dashed off quickly and rolled into one. That is not to say that there is not tremendous thought and research that has gone into this play, quite the opposite in fact, and some of the history provided on Teresa is rather interesting. The play struggles because it has too much to say, yet cannot do so with economy, and therefore themes of religion, gender politics, cultural disparity, homosexuality, spirituality, art, talent, and marriage feel under-developed and overly simplified. No doubt such a thematic laundry list is a daunting task to put on the stage, but with further refinement there is hope.

The results at the end of a play must be warranted based on the beginning of the play, and how it is structured thereafter. Plaza’s marksmanship is off, and when the “big reveal” happens in the second act it feels unearned and even gets an awkward laugh from the audience. The story of the unraveling marriage between Carlotta and Andres provides many nostalgic and beautiful moments; and the story of two women’s self-discovery could potentially be developed into something more substantial; but the concept of Saint Teresa’s life and teachings feels too thinly stretched to comfortably package these ideas (not to mention a handful of others) together.

All this considered, the performers fair rather well, as does some of the production. Elliot’s portrayal of Andres, the struggling Spanish artist coping with change is spot on. His subtly articulated physical life and characterization ebbs and flows between meek and macho as he looses in love yet gains in his art. Plaza’s character is often walking on eggshells, and she gives a warm and measured performance, which most of the time rises to meet Elliot’s. Larkin, who undoubtedly has the most fun role in the show, appears as if she is enjoying it. Her Becky is delivered with cunning pep and she is a welcome spark of energy on stage; although as a high-powered, New York, Jewish, lesbian, she does look a little...Barbie (but let’s not judge this Playbill by its cover).

Will Pomerantz’s direction is naturalistic (they even make gazpacho on stage), and much attention has been focused on character and relationships, however, the production never quite reaches a boiling point and the final moments of the play (save Elliot’s ending solo minute or two) feel tepid. The play often deals with the clashing together of two divergent opinions yet strangely it does not build, and as a result lacks much immediacy.

With a tighter focus and a more-solid structure, Plaza might find that the story of Saint Teresa flows more seamlessly through the contemporary world of the play, whereas now it jerks between plot points and lacks cohesion.

(Teresa's Ecstasy plays at The Cherry Lane Theatre, 38 Commerce Street, through April 1, 2012. Performances are Tuesdays through Saturdays at 8PM; and Sundays at 2PM; there will be an additional performance on Monday, March 12th at 8PM; and Sunday's performance on March 18th will take place at 7PM. Tickets are $61 and are available at cherrylanetheatre.org or by calling 212.352.3101.)