By Kate Foster; Directed by Jeff Woodbridge
Part of the 2012 Frigid Festival 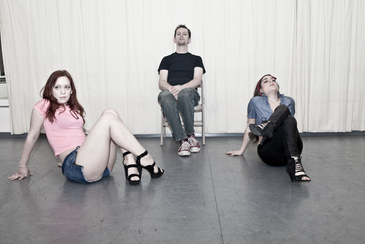 BOTTOM LINE: This play successfully finds humor as it explores the issue of working as a stripper, both through feminist theory and its effect on personal relationships.

The issue of sex work has always been a divisive one amongst feminists, and one that has triggered much debate amongst feminist theorists. Playwright Kate Foster cleverly takes this issue on as comic inspiration for her play Stripper Lesbians, which centers on two theory-spouting feminists who work side by side as strippers while engaging in a Sapphic relationship.

At the center of the play is Evan (convincingly portrayed by Amanda Berry), a women’s studies major who decides to make both her work as a stripper as well as her sexual relationship with a fellow stripper, Aisha (played by Samantha Cooper, who is particularily convincing in her stripteases), the center of her thesis. Evan keeps her thesis a secret from Aisha, not wanting her to discover just how much she has analyzed her personal relationship in favor of her academic aspirations. Caught in the middle of the two is DJ (played with great comic skill by Joe Beaudin), who dated Evan before she became a stripper and embarked in a sexual relationship with her coworker while he was out of town.

While the peak of the plot is slow to come and shortly explored, much of the play’s bulk instead relies on finding humor in women’s studies literature paired alongside the real life events of the characters. In one particularly hilarious scene, Aisha and Evan perform a student/teacher stip tease where Aisha spanks Evan. During the entire act the two discuss the theories of Judith Butler and Simone DeBeauvoir and the idea that gender is merely a construct. The serious discussion of these theorists becomes comic gold while Aisha shouts out cartoonish sexual dialogue for her audience of male oglers and engagers in over the top sexual poses.

In another scene their friend DJ, an out-of-work actor, performs a discussion on the issue of prostitution from Our Bodies Ourselves as a monologue. Here Beaudin shows his comedic talent as he attempts to create multiple characters from the classic feminist text.

The comedic moments of the play as well as the lightning fast exchanges of barbs and one liners could have been strengthened with a bit more development of the characters and their relationships. Playwright Foster and director Jeff Woodbridge show a gift for comic timing and comedic dialogue, making the laugh-inducing moments of the play tightly orchestrated, able to milk every laugh possible from each joke. The convincing chemistry of Berry and Cooper as a lesbian couple also adds a level of believability to the production and storyline. With just a smidge of fine tuning, Stripper Lesbians is a play that will surely continue on past the duration of The Frigid Festival.