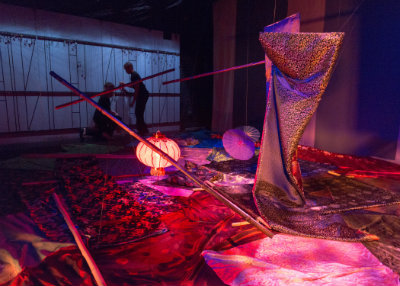 BOTTOM LINE: A beautiful and unusual pair of stories told through object manipulation that takes its time in the telling.

For the characters in Hanne Tierney’s duo of short pieces, life changes are not just inevitable, they are enhanced and driven by the supernatural. For these folks, the interminable ebb and flow of fortune and love are touched by spirits, for better and for worse. Sharing both their other-worldly influences and the mainstage space at HERE, the two pieces together form Strange Tales of Liaozhai, now playing through September 22nd.

Playing with the paranormal is not the only things that makes these tales strange (in the best way), both stories are vividly told through illustration or object manipulation. Divided scrims become canvases for subtle and effective brushstrokes, both illustrating a narrative and playing backdrop to one. Hundreds of strings (5,000 feet worth!) tautly descend from the grid to the stage floor affixed to one object or another, revealing their purpose in delightful spells throughout the performance, each handled expertly by visible hands on stage right. Sumptuous bolts of fabric become cheeky or wise, bamboo poles become potentially dangerous treetops then abiders of law, lanterns, loyal ladies.

The supernatural comes naturally, if you will, to these stories and these character’s lives. In this strange world of Strange Tales, the mystical other world contributes to the existing cosmic maleability of life; spirits merely enter to stir the ever stirring pot, creating a bit more chaos. The focus lies on the humanity of the characters, especially significant in the absence of physical human presence. A young girl learns that she must become a woman; a young man finds out the hard way that he should not be prideful. Culled from a collection of tales bearing the same name by scholar Pu Songling in 18th century China, the stories seem to be both an invaluable guide to the trials of growing up and a reminder of the importance of reverence for one’s own history and the spirits that linger from the past.

Thanks to the intricacies of the impeccable puppetry, the piece as a whole operates at a pace far different from the city outside. Slow and steady, delicate and dutiful inanimate items are brought to life, magically hitting their marks to transform. Though the process is not instant, part of the joy becomes awaiting that transformation, but it does require a more pronounced patience than most performances (or life in general) require of this instant-gratification generation.

Aside from the aesthetics, too, the pieces are both entirely underscored by live music, played by one musician, Jane Wang (also the composer), and a wide array of interesting and seemingly hand-made instruments. The music itself blends beautifully with the narrative, and it is only lamentable that Wang plays offstage so that she is not visible throughout the performance without glancing away from the main action.

All in all, these Strange Tales are gorgeously and uniquely crafted. They provide a delightful challenge to the impatient that, if answered, offers amply just rewards.

(Strange Tales of Liaozhai plays at HERE, 145 Sixth Avenue at Dominick (entrance on Dominick), through September 22nd. Performances are Tuesdays through Saturdays at 8:30PM, and Sundays at 4PM and 8:30PM. Tickets are $10 in advance and $20 on the day of the show and are available at here.org or by calling 212.352.3101.)