Written and directed by John Jesurun 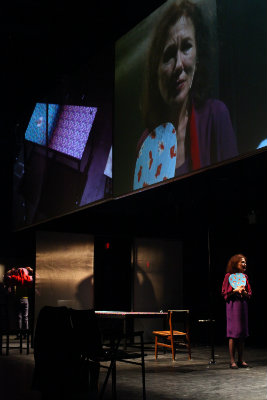 BOTTOM LINE: A visually impressive multi-media production with a cryptic, abstract story about a whorehouse airplane.

Stopped Bridge of Dreams is a pretty cryptic title, isn’t it? What is this “bridge of dreams”? Is it an actual bridge where dreams come true? Or is it a bridge that people dream of? Or perhaps a bridge between reality and dreams? And how is does a bridge become “stopped” anyway?

To be honest, I cannot answer these questions, even after seeing the play that bears this title. In fact, I can't even tell you how (or if) this title relates to the play itself.

First and foremost, Stopped Bridge of Dreams is a multi-media feast of a show. There are large, rotating projector screens, cameras strategically placed around the performance area (“stage” would be a misnomer, as the performance unfolds in a rectangular space flanked on two sides by the audience) and a smattering of projected video footage. Some of the video elements are, as the press release states, “beamed in from remote locations.” Others are pre-recorded. Still others are projected images of the performers currently on stage, sometimes filmed through screens, sometimes filmed using an iPad that a performer is holding. Nothing about the show’s design is conventional and, in fact, the show’s writer/director/multi-media artist, Obie Award-winner John Jesurun, seems to have made most of his decisions as a reaction against conventional theatrics. The result is a sleek, futuristic, eyefull of a set that is almost constantly rotating, shifting and snatching up projected images.

This is all well and good, as many plays successfully push design boundaries. After all, what good is theatre if it doesn’t try to show us something worth looking at? The orchestration of the show’s design is a real-time, nearly seamless wonder and the crew of people behind it deserve a good helping of praise.

Where Stopped Bridge of Dreams runs into trouble, though, is in the script. After seeing this play, here’s what I can tell you about its story: It takes place on an airplane that is also a whorehouse; this “whoreplane” (my term) is operated by an old-ish woman referred to in the program as Mrs. X (played by a woman named Black-Eyed Susan); Claire and Hiroshi (Claire Buckingham and the sexy southern-drawled Preston Martin) are two of the plane’s prostitutes; Hiroshi may or may not be Mrs. X’s son. The rest of the 90-minute show’s content is lost in cryptic language, appearances by odd, unexplained characters and video-projected storytelling by other odd, unexplained characters. I don’t doubt that Jesurun has a whole slew of ideas, intentions and literary allusions woven into his poetic script, and perhaps an audience member with the right niche-knowledge would be able to pick many of these out (being familiar with the 17th century Japanese writer Saikaku Ihara would be a good start). But it seems that the primary emphasis of the show is on weirdness. Weird it is, but also confusing. After I exhausted my initial desire to understand what was happening, I even found myself bored.

On the night I attended, Black-Eyed Susan performed even though she had lost her voice. I was certainly impressed with her determination as she whispered all of her lines into a microphone and suppressed coughing fits on stage. The rest of the cast also delivered their parts well, though most of the actors did get tripped up on several of the tongue-twister lines.

For me, the interesting design and decent performances were not enough to save the show from its terminally confusing weirdness. Those who like multi-media theater experiences may enjoy Stopped Bridge of Dreams for the spectacle, as long as they don’t mind dealing with the cryptic script and abstract story line. Perhaps it would be a good idea to explore the show’s interactive website before you decide to go. The techy dazzle wasn’t enough to sustain me through the entire show and I was glad when it ended and I didn’t have to try anymore. Walking out of the theater, my companion asked me, “was that show confusing, or am I just stupid?” I assured her she wasn’t stupid.

(Stopped Bridge of Dreams plays at the Ellen Stewart Theatre, 66 East 4th Street, through February 5, 2012. Performances are Wednesdays through Saturdays at 7:30PM and Sundays at 2:30PM. Tickets are $25 or $20 for students and seniors. To purchase tickets, visit lamama.org or call 212.475.7710. For more information visit bridgedream.com.)