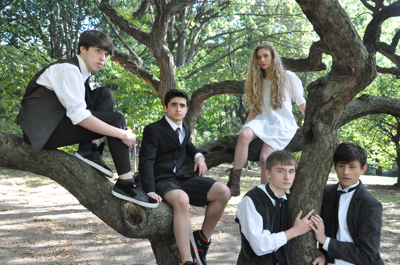 BOTTOM LINE: A wonderful play that everyone should read, nevertheless a hard one to stage.

I was excited to see Marvell Rep's Spring’s Awakening (the 19th century German play upon which the 2006 Broadway musical Spring Awakening is based). One of my favorite plays from a very interesting era, Spring’s Awakening is a timeless story about teenagers discovering sex and exploring what it means to have sexual relationships. In their conservative town, these new feelings have never been named out loud, and the kids are thoroughly freaked out by what they are experiencing. This is a world where storks deliver babies to married people and children are not to ask questions.

Frank Wedekind wrote Spring’s Awakening in 1891, and this style of literature falls into the period sort of after Romanticism and sort of before Symbolism, though it ventures quite deep into both camps. As a result, the play is an inquiry into social behavior that challenges norms and seeks a higher truth, and also treads into a mystical sensibility to support rather profound themes. Its nonrealistic content -- both ethereal and grotesque -- makes production a challenge, especially without a very specific vision.

Marvell Rep does a very serviceable job with the play, basically replicating what's on the page directly onto the stage. There isn't much imagination in the recreation of the story for a modern audience; basically what you see (read) is what you get. The themes are there, and the audience is free to interpret them within a modern context or a historical one without comment from the production itself. It’s easy to identify with the story -- even 120 years later when it seems like sex is everywhere, puberty still sucks.

The casting is age-appropriate, and the young ensemble does a wonderful job with challenging roles, which approach melodrama but pull back to a grittier reality before they actually milk emotion. No easy feat for any actor, let alone one with fewer years of practice. Lizzy DeClement plays 14-year old Wendla with gusto, balancing joyful youth with stark adult realizations. Giuseppe Bausilio as Melchior and Dalton Harrod as Moritz also give strong performances as their safe childhood walls begin to crumble. Director Lenny Leibowitz extracts a sweetness within the characters that supports the empathy you feel as they encounter puberty without any sort of road map.

There is much to enjoy in this earnest production, however its biggest roadblock is its set, which allows for only one entrance/exit and slows everything down to a crawl. Though the design -- rustic log cabin meets netherworld -- is very attractive, with only one door there is never fluidity between scenes. And unfortunately, Spring’s Awakening is comprised of dozens of short vignettes. Forget the extra time it takes to enter and exit between scenes (and when I saw the show it clocked it at nearly 3 hours), but it also slows down the momentum of the story. Just when the energy builds, it stops as we go to black, swap the furniture, re-set, and start all over again.

If you have the stamina and the interest, you'll find much to enjoy in Marvell Rep's Spring’s Awakening. Either way, I highly recommend reading the play, which is literary gold and captivating in both an historical way and a surprisingly contemporary one as well.