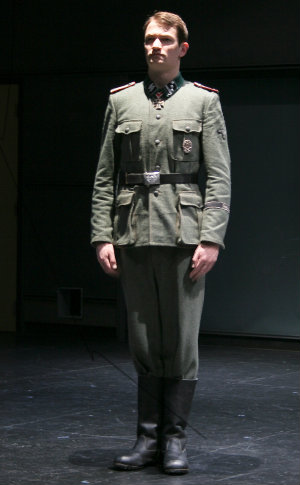 BOTTOM LINE: A captivating, trim, and heavily interactive piece about the pervasive similarities and motivations of war.

Each night Soldier presents a new opportunity for young Nazi officer, Heinrich Weiss, to finally get his men out of purgatory. He speaks bluntly to twelve audience members, some of whom receive more physical contact that others, beseeching them of his cause. Black box no longer, through December 22nd, the downstairs space at HERE is a dismal waiting ground on the Styx shore, as exposed and tough as young Weiss himself.

Stranded and waiting at the River Styx, trying as he might to get enough coins for passage across for him and his men, Heinrich has received nothing but disparaging remarks from passers-by. But with each new audience, he tries yet again to convince the crowd that these are good boys, they fought for their country, and that no one should be sorry for their choices. This motto of his, “Never be sorry for what you do,” comes verbatim from his father, a fellow German military man. Though such staunch nationalism cost the Weiss family their lady of the house (a British wife and mother who fled as soon as Hitler began to climb the ranks), it is what keeps them fighting, forging ahead, and unflinching, at least as Heinrich sees it.

Despite Heinrich’s need to convince the audience of his choices in order to gain passage, he never eschews responsibility or reneges on the decisions he’s made, which is what keeps Soldier from merely being a contrarian piece trying to humanize Nazi actions. Smartly written and portrayed by Jonathan Draxton, Heinrich is enriched with enough rhetoric and pride that in his unsympathetic didacticism, he represents all manner of soldiers from across the generations and political spectrum, not merely one of the most loathed. Proudly espousing his fight for a brighter, more beautiful future, Draxton cleverly places Heinrich within the classic military continuum, where enemies change but goals remain the same. Because of this, Soldier enters strongly into a timeless conversation and overall examination of wartime motivations, an avenue that never fails to be fruitful.

Above and beyond his thoughtful material, though, Draxton dutifully performs the role of Heinrich with ease and grace. Unwavering in his German accent, Draxton looks every bit the part: tall, blonde, and strapping, his eyes narrow frighteningly when he doesn’t get what he wants. Costumed authentically in green felt with all manner of iron crosses, swastikas and eagles, Draxton’s Heinrich is a walking emotional minefield, becoming likable or despicable from moment to moment, but unceasingly absorbing throughout.

At just about fifty minutes, Soldier is a meaty and meaningful discussion-piece with a good heart: 50% of proceeds are being donated to the Wounded Warrior Project, a nonprofit organization that assists injured service members.