Book and Lyrics by Marsha Norman; Music by Lucy Simon;


Based on the novel by Frances Hodgson Burnett; 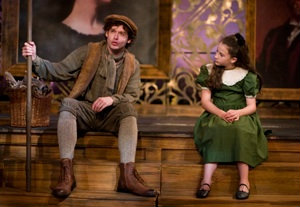 BOTTOM LINE: The Secret Garden is proof that the arts are in bloom in Astoria

The Astoria Performing Arts Center is an organization responsible for bringing theatre to this pocket of Queens, and the neighborhood is ever grateful for their contributions. After last night's performance of Marsha Norman & Lucy Simon's musical The Secret Garden, patrons could be seen warmly thanking APAC's Artistic Director Tom Wojtunik (also the production's director) for continuing to bring such wonderful theatre to the community. Although I use the words "community" and "theatre" in the same sentence do not make the assumption that APAC is producing "community theatre" or productions of such a caliber. APAC's production of The Secret Garden is smartly directed and well executed.

The story (based on the novel of the same name by Frances Hodgson Burnett) is of one Mary Lenox (played by the very talented Hannah Lewis), a child whose entire family has been killed by a cholera epidemic in India. With no other surviving relatives, the contrary Miss Lenox is shipped off to the moors of England to live with her uncle, the hunchback Archibald Craven (Patrick Porter) who sequesters himself in his gloomy mansion haunted by the memory of his deceased wife, Lily. Thrown into an unfamiliar world, Mary wanders around the house and the grounds; she eventually learns of her Aunt Lily's secret garden and becomes determined to find it and bring it back to life. Unwittingly, Mary has the same effect on Misselthwaite Manner as she rejuvenates the lives of those living and working within, including her crippled and cantankerous cousin, Colin. The musical, accompanied by one of the most sensuous scores in the last 30 years, tells a story of family and friendship, loss and memory, disability, and positivity that leads to renewal.

The musical is performed in the Good Shepard United Methodist Church in Astoria, and one has to commend Wojtunik and Christine O'Grady (musical staging) for translating such a large-scale musical into this challenging space. The result is a creative and minimal production rather effectively haunted by the ghosts of the past. Michael P. Kramer's suggestive set decks the stage with classical portraits spanning the floor to the ceiling of the theatre. The setting rightfully depicts Misselthwaite as the ominous mansion mired in the Craven family's tormented history. The portraits loom over the production and the ghosts meander about the stage giving way to the notion that the human world and the spirit world are never fully separable.

The musical (which I have enjoyed seeing numerous times) is powerful and sweeping with the potential to carry one away and/or evoke sentimental tears. Either way, the musical itself is genuinely touching, heartfelt and at the same time, artful. Yes, sentimentality and artistic integrity can go hand in hand! APAC's production succeeds in capturing the tone of the piece with all its heightened moments of chaos and catharsis. The ensemble is an oppressive force, erupting from the walls of the theatre, providing a vocal explosion as the ghosts who visit the living. The effect is quite literally, chilling.

The leading cast, however is a tad uneven. One of the show's significant themes, as mentioned above (not to mention in the program) is disability; yet APAC's Archibald makes little of his hunchback and walks around the stage sans affectation, which ironically handicaps the story in many ways. The interpretation of the character relies on long outward gazing, and lacks the intensity of a man who is tormented by the memory of his lost wife and the thought of his invalid son. On the vocal side, much of the cast is under the impression that if you are singing big you must not be acting well; an audible trend coming from Broadway where singers have become increasingly precious with their voices. The singing need not be compromised for the sake of the acting, and in thru-sung musicals, it must not be. Although the entire cast is spritely, effervescent, and full bodied in the acting department, some members lack the vocal size their roles require.

Jennifer Evans charms as the specter Lily with a fluty soprano that is solidly thread throughout the score; and Benjamin J. McHugh is a strong addition to the cast in the role of the jealous brother Neville who relishes in the soaring “Lily’s Eyes.” At the center of this piece is the young Hannah Lewis, who delivers a well-sung performance and a well-shaped character to boot! Not an easy task for a twelve-year old. Her youthful counterpart Sam Poon is similarly endearing in the sour-turning-sweet Colin, and his duets are delightful.

On the whole the production blossoms. Wojtunik’s vision is ambitious, and his smart and economic direction makes the production. As a new resident to Astoria myself, I must say that I too am glad to see Astoria Performing Arts Center tackling lofty material and letting it bloom.

(The Secret Garden is produced by the Astoria Performing Arts Center and plays at The Good Shepard United Methodist Church, 30-44 Crescent Street (at 30th Road), through May 26, 2012. Performances are Thursdays through Fridays at 8PM and Saturday at 2PM and 8PM. Tickets are $18, or $12 for seniors/students and can be purchased at apacny.org or by calling Ovation Tix at 866-811-4111. For more show info visit apacny.org.)