The Rope in Your Hands

By Siobhan O'Loughlin; Directed by Danielle Skraastad
Part of the 2012 Frigid Festival 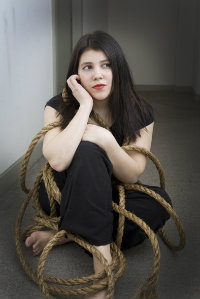 Hurricane Katrina was the kind of uncommon and surreal event that completely changed a city overnight. The raging storm, and subsequent flooding, left most of New Orleans’s streets underwater. From there, the rebuilding has been an endless task.

In her one-woman show, The Rope in Your Hands, Siobhan O’Loughlin takes her audience into post-Katrina New Orleans, embodying thirteen different characters based on actual Katrina survivors. The characters represent the vast spectrum of people who reside in New Orleans: O’Loughlin has tailored a cross-section of the population that varies in age, class, and race. They also vary in how deeply rooted their lives are in New Orleans (for some, life anywhere else is more unimaginable than life in a wrecked version of their beloved city).

The 50-minute show is an ambitious challenge for O’Loughlin, who switches between the characters dozens of times, adjusting her posture, facial expressions, and vocal intonation with each shift. She fares well and, the night I saw the performance, didn’t stumble once as she became a wealthy Southern belle, then a poor old man, then a little girl, then an English relief worker. Overall, her performance was dazzling and though some of the characters were more engaging than others, they all managed to offer some insight into what it means live in New Orleans and what it takes to rebuild that life.

The Rope in Your Hands offers a window into the array of reactions people had to the hurricane and also demonstrates that in such an event hope and desperation aren’t firmly linked to privilege and poverty, respectively. Instead, Katrina’s raging winds and water leveled the playing field for these people at the most emotional and instinctual level. In other words, no one was equipped to deal with Katrina, but some people adapted better than others. The show also portrays Katrina as a sort of magnifying glass, which identifies how racial and economic inequality are part of the fabric of America and how such a disaster can bring these issues to the surface.

In the end though, The Rope in Your Hands projects a glimmer of hope that the old Jazz-blasting city can find its identity again, something that many of the play’s characters have given up on completely.

(The Rope in Your Hands plays as part of the Frigid Festival at the Red Room, 85 East 4th Street, through March 4, 2012. Remaining performances are Wednesday, February 29th at 8PM; Saturday, March 3rd at 11PM; and Sunday, March 4th at 6:30PM. Tickets are $12 and can be purchased by visiting smarttix.com or by calling 212.868.4444. For more festival or show information visit frigidnewyork.info.)