By Erika Sheffer; Directed by Scott Elliott
Produced by The New Group 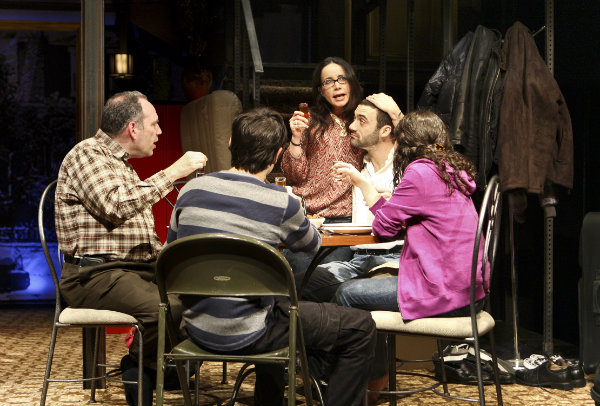 BOTTOM LINE: A perfect off Broadway family drama with a phenomenal cast and excellent design led by a top-notch director.

In Sheepshead Bay, Brooklyn, a tightly-knit but cantankerous family of Russian immigrants struggling to get by are interrupted by the arrival of Uncle Boris, a charming but dangerous relative from the old country who threatens the stability and cohesion of the family.

Directed by New Group Artistic Director Scott Elliott, Russian Transport is a world premiere and the off Broadway debut for playwright Erika Sheffer. This intricately-woven drama is headlined by Janeane Garofalo, whose command performance is solidly matched by each actor in the superb cast: Daniel Oreskes, Morgan Spector, Sarah Steele, and Raviv Ullman.

Russian Transport owes its look to a team of high-end designers. The cozy but crowded sets come from Broadway's Derek McLane. The subtle, textured lighting is by Broadway designer Peter Kaczorowski. And Tony-winner Ann Hould-Ward executed the comfortable but gradually progressing costumes.

Garofalo is transformed in her portrayal of Diana, the savvy, sassy matriarch. As her husband Misha, Oreskes’s simple, honest performance is the perfect compliment. Spector brings charm, confidence, and sex appeal to his disarming character. The whole cast is strong and empathetic, with genuine emotion and clear intentions whether in English, Russian, or a mix of both. Meanwhile Janeane Garofalo and Sarah Steele are the most striking mother/daughter casting of recent memory thanks to combined efforts of the actresses, the director, costuming, and casting director Judy Henderson.

And great teamwork and collaboration are exactly what propels this play to success. It’s a total package production — everything about it works, and works in conjunction with the other elements. Russian Transport represents the fruition of an entire company at the top of their game, demonstrating why The New Group is such an important off Broadway presence.

The synergy of fiery grounded performances and rich, nuanced design is a tribute to director Scott Elliot. Elliot creates a nuanced, realistic world where to play can live and guides the ensemble to a complex, clear depiction of a family.

Russian Transport is a funny, moving, and surprisingly play. With a cast of likeable characters and strongly defined relationships, audiences are easily hooked into the action and then taken on a suspenseful, evocative ride, landing somewhere unforeseen and unexpected. The audiences are a little outrageous and misbehaved, but the action on stage is completely in order and perfectly rendered.

Russian Transport is a paragon of off Broadway drama and features some of the finest (understated) design and performances on stage right now. This one’s worth climbing through the Theatre Row complex to see.

(Russian Transport plays the Acorn Theatre at Theatre Row, 410 West 42nd Street between 9th and 10th Avenues, through March 24, 2012. Performances are Mondays, Tuesdays, and Wednesdays at 7PM; Thursdays, Fridays, and Saturdays at 8PM; and Saturdays at 2 PM. Tickets are $60 and are available at telecharge.com or by calling 212.239.6200. For more information, visit thenewgroup.org.)