Off Off Broadway, New Short Plays
Runs through 10.13.12
The Brick, 579 Metropolitan Avenue, Brooklyn 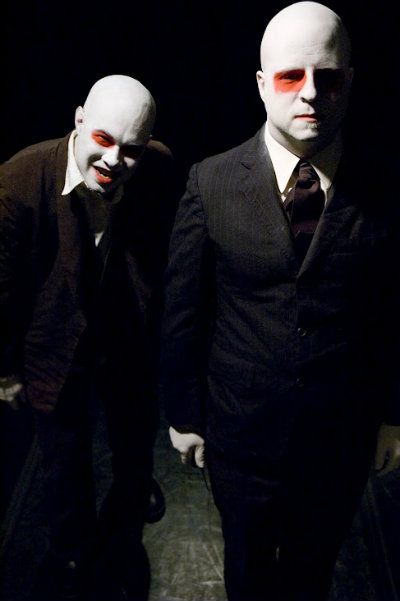 BOTTOM LINE: Raw Feed is an evening of original works that provides the instant gratification of horror and blood with clever commentary and character exploration.

A stranger on the phone who can see inside your home, that video online that you know you shouldn't watch, the urban legend you wished wasn't true...these well-known scenarios are often horror-movie fodder. But this October at The Brick Theater in Williamsburg, the stories are live, and the stories are real.

Raw Feed is the latest offering of onstage blood bath that has become a yearly tradition of Nosedive Productions since 2006. Though this was my first experience with the horror anthology, it was apparent by the anticipation of my fellow audience members that this offbeat grab bag of theatrical tricks and treats has become a Halloween tradition for local theatre-goers.

The emcees for the evening are The Blood Brothers (Pete Boisvert and Patrick Shearer), two pasty boogiemen who enjoy a dark narrative as much as they enjoy the taste of human blood. And this year, the Brothers present a series of short plays that seek to add context to ripped-from-the-headlines stories of murder, betrayal, and the twisted side of our basic human needs.

Playwright Mac Rogers weaves the various plays together by crafting the dialogue for the Brothers. As might be expected by the “true-life” nature of these tales, the dialogue is peppered with commentary about social media obsession, over-abundance of news outlets, and our inability to put down our various devices and actually see the world around us. And while this commentary can become a bit heavy-handed at times, Rogers uses the amusing dynamic of our hosts (one refined and eloquent; the other an id-driven, monosyllabic product of blood lust) to keep the message from becoming didactic.

The diverse offering of plays is most successful when the playwrights internalize and humanize the actions of the people in these news stories. James Comtois’s Bachelor Number One, for example, showcases a twisted mind in a way that is both funny and relatable. Based on the story of the infamous “Dating Game” contestant who was discovered to be a serial killer. Comtois’s script illuminates the killer’s obsession with being discovered and, in doing so, speaks to each of our own need to be noticed, all while delighting as the comedic highlight of the evening.

Obsession and notoriety also play heavily in Rogers’s Kittens in a Bag, which follows the journey of a gay porn star whose online broadcasts move from suffocating cats to killing actual humans, all in an effort to leave his mark on the world. Rogers takes a decidedly subtler hand with commentary in this piece by creating a love story between Luka, the adult film actor, and the Internet, played by Emily Hartford. Hartford’s range is the stand-out performance of the evening. She wears a reflective mask as the Internet which she removes to become the various characters of chat room participants who help discover the identity of the killer. As Luka continually asks the Internet to perform web searches for his own name, we see him gradually falling in love with the reflective mask of the online world. Rogers’s modern take on Narcissus successfully holds the mirror to both the character and the audience.

Throughout the evening, the creative team makes bold and surprising choices, such as Nat Cassidy’s TALHOTBLOND, a performance art/dance piece about an online love triangle ignited by the lies of a lonely woman. The poignancy of this piece is accented beautifully by Stephanie Willing and Judy Merrick’s choreography and original music by Cassidy and Larry Lees. Danny Bowes’s Dark Mirror and Stephanie Cox-Williams’s All of Me get close to making a poetic statement of the human condition but fall just short, while Cassidy’s Joy Junction dwells a bit too long.

But with each company member wearing various hats as playwrights, directors, and actors, the evening is not a bit disjointed. The mission statement seems very clear here, and the evening, a very pleasant 95 minutes, has a nice flow. The versatile and nearly-bare stage is a dark, twisted playground for Ian W. Hill’s lighting and Douglas MacKrell's electric, appropriately choppy video design.

If you are a fan of the macabre, smart and daring original works, and someone who the Blood Brothers refer to as “a deadbeat who can’t afford Madame Tussaud’s,” then you’ll find Raw Feed perfect October fare.

(The Blood Brothers Present... Raw Feed plays at The Brick, 579 Metropolitan Avenue, in Brooklyn, through October 13, 2012. Performances are Thursdays, Fridays, and Saturdays at 8PM, and Wednesday, October 10th at 8PM. Tickets are $18. To purchase tickets visit ovationtix.com or call 866-811-4111. For more show info visit nosediveproductions.com or bricktheater.com.)