By Chris Harcum; Directed by Aimee Todoroff
Part of the 2012 Frigid Festival 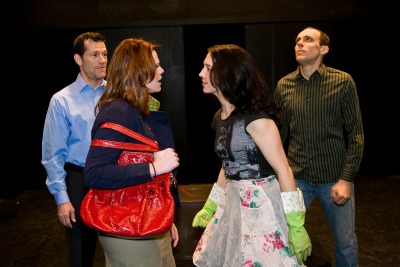 In the first scene of Rabbit Island, the protagonist Alex (Ethan Angelica) asks his therapist Dr. Bob (Joel Nagle), “When will I become a real New Yorker?” — a question that, at the show’s first performance, immediately engaged the audience’s attention. After all, New Yorkers love to analyze how life in the city is different from life anywhere else. Alex, a passive and principled Canadian, cannot imagine himself reaching the point of comfort that he witnesses in the people around him, a quality that he particularly attributes to a man he saw crapping on the sidewalk on the way to his appointment.

Dr. Bob, whose ethics are (to say the least) questioned later in the show, gives Alex an assignment: he needs to crap on the sidewalk himself. From this point, Alex becomes a sort of human pinball, passively bouncing from scene-to-scene, enabling the people he knows to engage in their most insane behaviors. One major player is Alex’s girlfriend Karen (played by the hilarious, on-point, somebody-please-give-her-a-sitcom Carrie Heitman), who herself is seeing a “life coach” and is ready to make some bold moves with Alex to prove she is "really living.” The other is Barbara (Mel House), a firey burlesque dancer who swoops in with even bigger ideas when Karen and Alex break up.

An additional, and unfortunately less relevant, element of the play is a sideshow duo, played by Mariko Iwasa and Phineas T. Haricot, who are a kind of living furniture in every scene. Though Iwasa and Haricot more than proved their talents in a pre-show mime dual, I thought their importance faded quickly once the play began and their loose association to Alex’s occupation as a mime wasn’t enough to bring them out of the shadows of the other performers. Perhaps they need their own show altogether.

Overall, Rabbit Island is the kind of funny, romping show that makes the most of its brief (60-minute) spotlight in the Frigid Festival. The characters are quirky and complex, the story is charming and relatable, the script is smart and snappy and it takes a valiant stab at figuring out what it means to be a New Yorker and what it takes to find love within urban chaos. And, though the show’s momentum falters at times, it roars back to life in the hilarious final scene. Rabbit Island is a funny, gross, off-colored gem of the fest — just the kind of show that Frigid is made for.

(Rabbit Island plays as part of the Frigid Festival at the Kraine Theater, 85 East 4th Street, through March 3, 2012. Remaining performances are Saturday, February 25th at 8:30PM; Monday, February 27th at 7:30PM; Thursday, March 1st at 6PM; and Saturday, March 3rd at 5:30PM. Tickets are $16 or $12 for students and seniors and can be purchased by visiting smarttix.com or by calling 212.868.4444. For more festival or show information visit frigidnewyork.info.)