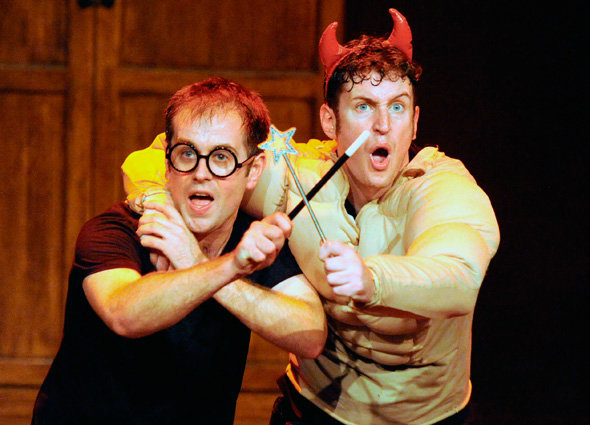 BOTTOM LINE: A British comedic duo re-tells the entire Harry Potter series in a madcap 70 minutes, that are hilarious and enjoyable, and best for a family with kids.

American theatre-goers are no strangers to the custom of British imports gracing our Great White Way. The newest of these transfers, Potted Potter: The Unauthorized Harry Experience, is certainly on the scrappy end of the spectrum, but it packs in enough fun and magic to create an enchanting evening for a family of Harry Potter fans. And running at a scar-splitting seventy minutes, your time in the theatre is about as brief as your trip apparating there! (Note: apparating is a dangerous method of travel and should not be attempted by muggles or under aged witches/wizards).

What appears at the Little Shubert Theatre is a very condensed re-telling of the seven book Harry Potter series (or eight movie franchise if you have inconceivably opted out of reading these treasures), written and performed by a splendid comic duo. Daniel Clarkson (Himself & Harry Potter) and Jefferson Turner (Himself & the other 300+ characters) are the classic combination of the funny guy and the straight guy. Turner mills around the theatre before the show, introducing himself to audience members, who mainly (and rightfully) consist of families with their enthusiastic and well-read children, while Clarkson remains immersed in his Potter reading on the stage. It is clear that Clarkson is the ardent Potter fan, whereas Turner is only interested in his own youthful fans.

The evening starts promisingly enough, with the hopeful Clarkson eager to perform his “potted” re-telling of Rowling, until Turner continuously ruins his good time with a lack of preparedness and an ignorance about anything Harry Potter related. Needless to say, the two neo-vaudevillians find a wonderful power dynamic on the stage, and their antics are often side-splitting. The only possibility for extra hilarity depends on the lucky kids called upon to be “seekers” in an audience interactive game of Quidditch. Although, it is doubtful that anyone can match the young boy at this past Sunday’s performance whose farcical energy surprised the actors as much as the audience -- I would imagine the comedic team are drawing up contracts to sign the little boy right now.

Although an enjoyable evening, it is certainly a family entertainment, and anyone seeing the show should expect this. Potted Potter often ventures into the territory of children’s theatre, but this is not meant as a disclaimer, just as a piece of information. Performers like Shari Lewis and Bill Cosby entertained children for years, but never failed to appeal to their more mature audiences in the process; the same can be said for Clarkson and Turner. Potted Potter is not Harry Potter meets Forbidden Broadway. It is much closer to The Complete Works of William Shakespeare (Abridged), just remember that Shakespeare’s audience was not as young as Rowling’s, and the same can be said for Potted Potter.

Any devout Harry Potter fan will squeal a bit when handed their Playbill accompanied by a free pair of circular black glasses; but even the biggest enthusiast might feel outdated without the companionship of a child. If one has the proper company, then grab your wand and say “Accio tickets!” The performers are entertaining and the laughter is infectious. Not recommended for sour Slytherins.