By Jack Canfora; Directed by Evan Bergman
Produced by The Directors Company in association with New Jersey Repertory Company 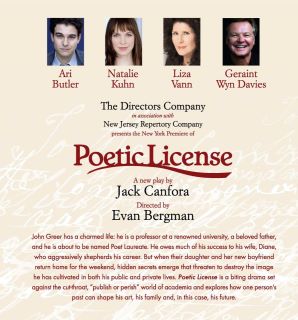 BOTTOM LINE: A terrific new play which explores the blurred line between plagiarism and mutual cooperation; the secrets that haunt our lives; and the relationships among husbands and wives, parents and children, and young lovers.

John Greer (Geraint Wyn Davies) is a distinguished professor of literature at an elite university and a Pulitzer Prize-winning poet to boot. Moreover, PBS is about to do a piece on him and he is on the verge of being named Poet Laureate of the United States, a position with no power and of little remunerative value but one which would represent the capstone of his career.

A soft spoken, self-effacing gentleman, John is looking forward to celebrating his birthday at home with his wife, Diane (Liza Vann) and his daughter, Katherine (Natalie Kuhn).  Diane, a documentary producer, is a tough, controlling, manipulative, and acerbic woman who has played a large role in managing John’s successful academic career and, unbeknownst to John, is hoping to use the occasion of the family birthday gathering to further John's career by tying it in with the PBS piece and Poet Laureate appointment.

Katherine, a graduate student who aspires to be a poet in her own right, no longer lives with her parents but with her boyfriend, Edmund (Ari Butler). She has come home for the occasion and has brought Edmund with her to meet her parents for the first time. Katherine is clearly “Daddy’s little girl” and her relationship with her mother is strained. She has warned Edmund at great length to be wary of her mother’s “charm offensive” but is unconcerned over how things might go between him and her father. As she sees it, her father is “so unintimidating, it’s astounding.”

Edmund, a graduate teaching assistant in literature, doesn’t quite see it that way. He claims to be more nervous about meeting John than about meeting Diane. Edmund’s trepidation has been compounded by the fact that, as he puts it: “none of my other girlfriends’ fathers had a Pulitzer on the mantle.” But as it turns out, there is much more that enters into Edmund’s anxiety than first meets the eye: Edmund believes that John’s entire life is based on a lie and that his poetic works have all been plagiarized. And once he makes that accusation, the questions fly fast and furious.

If Jack Canfora, in writing Poetic License, had limited himself only to adressing whether or not there is any basis to Edmund's accusation, this still would have been an enjoyable play, if nothing more than a good mystery story. But Canfora has gone further, using the issue of plagiarism as a skeletal framework on which to layer issues of much deeper import. As a result, this is not merely a good play but a terrific one.

The four actors in this production are all absolutely superb in their respective roles. Butler plays the role of Edmund just enough off-kilter to suggest that all might not be quite what it seems with him, without giving anything away – a fine line to walk. Kuhn is wonderful as Katherine, capturing the essences of three different relationships in one character: a young woman infatuated with her new boyfriend, Daddy’s little girl who still idolizes her father, and the ever-rebellious daughter whose mother will never cease setting her teeth on edge. As Diane, Vann has perhaps the juiciest role of all and what are probably the best lines in the play – and she plays them for all they’re worth. And Davies exhibits an extraordinary range of emotions and character shifts; if anyone comes close to stealing the show it is he.